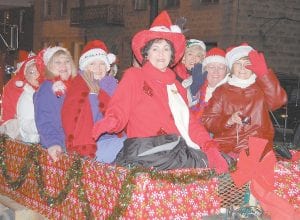 Members of Letcher County Mountain Mamas chapter of the Red Hat Society greeted parade-goers with smiles and waves as they made their way through the City of Whitesburg’s annual Christmas parade. Originally formed in 1988 for women aged 50 and over, the Red Hat social organization, one of the world’s largest, is now open to women of all ages.

The City of Whitesburg held its annual Christmas parade early on the night of December 14. A combination of more parade entries than usual and pleasant weather helped make the event the city’s largest holiday celebration in many years. 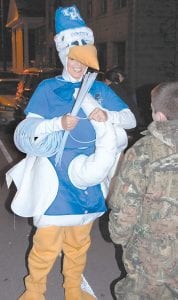 Tricia Baker was dressed in a stork’s costume while she handed out glow-sticks for the Whitesburg Women’s Center. 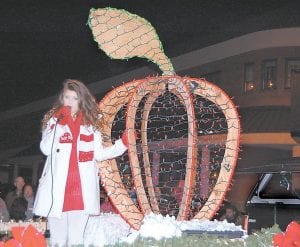 Taylyn Combs sang Christmas music while holding onto a large red apple that was part of a Mountain Comprehensive Health Corporation parade entry that finished third in the best float competition. 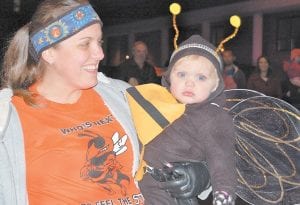 Emily Johnson held her daughter, Evie, who was dressed as a Whitesburg Yellowjacket. Mascots from all Letcher County schools walked in the parade to promote the school-based clinics being offered by Mountain Comprehensive Health Corporation of Whitesburg. 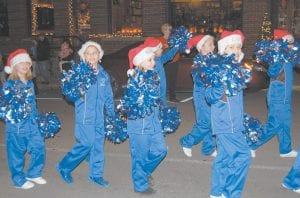 Members of the Cowan Elementary School cheerleading team were full of holiday spirit as they marched up West Main Street in Whitesburg during the annual Christmas parade. 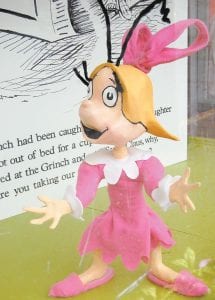 Cindy Lou-Who, a character from the Dr. Seuss book ‘How the Grinch Stole Christmas,’ is seen in a window display at the dental office of Dr. David Narramore on Main Street. The hand-made display created by Narramore and his wife, Lisa, and daughter, Alex, should be seen after dark to be fully appreciated. 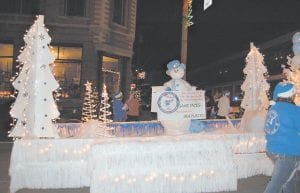 The Whitesburg Women’s Center, which opened in September on the campus of the Whitesburg Appalachian Regional Hospital, won second place in the best float category with this entry. A separate entry from Whitesburg ARH’s Jenkins clinic won first place. 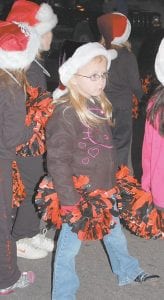