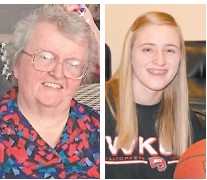 Ann Bradley, left, and Whitney Creech are the grand marshals.

Opening ceremonies for the Mountain Heritage Festival Parade will begin at 10 a.m., Saturday, Sept. 24, in front of the Letcher County Courthouse in downtown Whitesburg when the grand marshals of the parade, Ann Bradley and Whitney Creech, will be introduced.

Ann Bradley is a Letcher County’s Family & Science Extension Agent, and has enjoyed a very rewarding career with the University of Kentucky Cooperative Extension Service.

Since making Letcher County her home in June, 1967, she has worked with many 4-H Club boys and girls and has seen them become happy and successful adults.

She says she very much appreciates all the support the Extension Homemakers and others have shown her with her programs, projects, and activities through theyears.

Miss Bradley will be retiring September 30, having just completed a 49-year career. She says she plans to remain active in Whitesburg Methodist Church and several community organizations and groups of which she is a member.

Whitney Creech is the daughter of Dwight and Janet Creech of Jenkins. She was an outstanding basketball player on the Jenkins Cavaliers.

Miss Creech began her basketball career playing in kindergarten. She spent many summer vacations going to numerous basketball camps to improve upon her talents, and was chosen to play on the high school varsity team as a fifth grade student.

She will go down in the state record books as one of the most successful basketball players, boys or girls, in state history. She finished her high school career with 5,527 points. She is the first player in state history, girls or boys, to surpass the 5,000-point mark for a career.

The Naismith Memorial Basketball Hall of Fame in Springfield, Mass., will hang her Cavaliers basketball jersey in recognition of her accomplishments.

Miss Creech is pursuing her education and her love for basketball by attending and playing for Western Kentucky University.