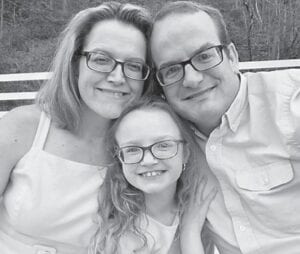 Dan and S.J. Brennan are pictured with their daughter, Brinklee.

After 495 days our little community hero, four-yearold Laney Webb, is finally home after her fight with leukemia. On February 23, 2019, she was diagnosed with acute myeloid leukemia, which is a cancer of the bone marrow and blood. She then had her first bone marrow transplant on June 3, 2019. We, as a community, were all so happy when the transplant was a success.

Then, in November 2019 they found out the cancer was back. So, she had to start all over again with the treatments, then the transplant again this March.

Praise God, she was welcomed home with a parade this past Thursday. There were so many videos on Facebook, which just proved that little Laney has touched so many people throughout her struggle and so has our mighty God. Keep praying for this family.

It’s so sad that most fami- lies don’t get to see or talk with one another unless they’re at a funeral. Every time we attend a family funeral we say, “Why don’t we get together sometime and just talk all we want to?” We make plans to do it, and then before you know it you’re at another funeral asking the very same question. Life just has a way of making everyone too busy to visit one another. It was good to see and talk to the cousins that were there at my Aunt Linda Joyce Pennington Hall’s funeral last Friday. 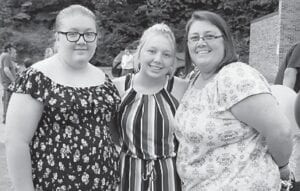 It was so good to have our brother, Albert Tacket, and his wife Tonya with their granddaughter Harlyn here for the Fourth. This was the first time we have seen them since January. He’s a carpenter in Randleman, N.C. This past week he had an accident on the job and broke some ribs. He was moving mighty slow, but I don’t think it’s anything serious. We all sat out on Mom’s back porch and reminisced about our growing-up days. I love listening to the many different things that we remember and how we all remember them differently. I got one though that all five of us remembered the same way. 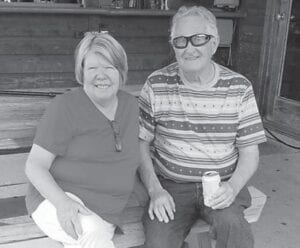 After Charlene graduated from Whitesburg High School in 1973, she started working in the Letcher County Circuit Court Office. So, she had her own money and would sometimes buy foods that Daddy didn’t buy. One that she had heard so many people talk about was pizza and so she bought a box of Chef Boyardee Pizza Mix. It had the yeast bread dough in a pack, the pizza sauce in a can, and the Parmesan cheese in a smaller can. Back then there were no fast food restaurants in Whitesburg, or none that we were aware of, and I don’t think frozen pizza was around then either. As she was making the pizza and was ready to put the cheese on and opened the pack, she stunk up the whole house. She said she thought it smelled just like puke and she couldn’t believe people could eat that. I think we all changed our mind though after it baked and she let us all have a little sliver.

Another thing she would buy is Reece Cups. It’s amazing how small of a sliver she could cut off that one cup and give to us. But, she did have to make it last for all five of us. Seriously though, I don’t know what we would do without her. 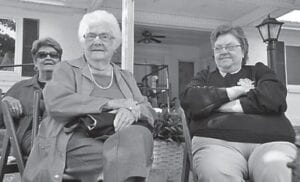 Sitting outside are Lottie Hampton with Mable Jo Buttrey and Cheri Hampton.

Once again there are so many birthdays to mention. Leon Blair and Dexter Campbell both had birthdays on the 1st. Randy and Kathy Banks celebrated their wedding anniversary on the 2nd and Sam and Nancy Caudill Oaks on the 3rd. Bobby Ray Howard is a firecracker baby on the 4th. Then S.J. Brennan and her husband Dan Brennan both celebrated on the 5th, along with Vickie Deane Banks Wampler, Vickie Frazier Caudill, and Shakeithra Begley. Lisa Bates, Robin McHone, Lester McPeek, and Lottie Hampton all had birthdays on the 6th. A Marlowe Coal Camp friend of Mom’s, Mildred Necessary Spence, had a birthday on the 7th and Tyler Watts, otherwise known as “Post- It-Picasso” because of all the window displays he has done with post-it-notes, has a birthday on the 8th.

Please continue to pray for Jo Ella Taylor Sturgill’s husband Darrel. He has been in the hospital again with his heart. Also, remember Preacher Bill Craft and his wife June, who is still in the Letcher Manor Nursing Home. Lisa Bates had surgery on the 7th, so keep her in your prayers. I know we have many sick with cancer that need to be lifted up in prayer daily. Last, but not least, all those that have lost loved ones, especially my pastor Bill Jones and his family.

It felt so good to be able to attend church services this past Sunday. I hope we can continue to have them this way, if not we will just take what we can get.

I hope everybody stays safe and has a good week.