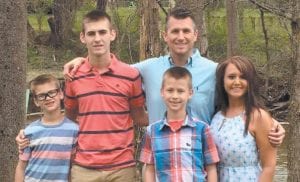 A Letcher County couple is grateful for the outpouring of community support received after learning that their 38-year-old son and his girlfriend were fatally shot in central Kentucky.

“People have carried food in here and just came, sat, visited and expressed their sorrows,” said Bill Jones, pastor of Letcher Independent Baptist Church. “We’re just overwhelmed by all the love we have been shown.”

Robert Kevin “Bobby” Jones and his girlfriend Crystal Warner, 35, attended a worship service at Letcher Independent Baptist Church and had lunch at his parents’ house in Crases Branch before leaving around 3 p.m. on July 3. The couple had planned to stop by a house Bobby owned near the town of Springfield in Washington County, on Texas Mackville Road, a distance of about three hours from Letcher County.

Bill and Sandy Jones told their son to send them a text message when he back to the homer where he lived in Florence in northern Kentucky. Mrs. Jones sent her son several text messages hoping for a reply, but she never received a return text from their son. 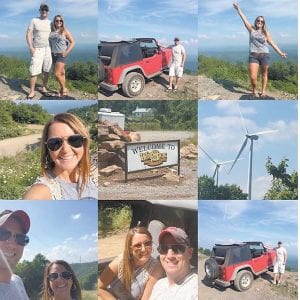 Bobby Jones and Crystal Warner composed this collage after they visited Windrock Park in Oliver Springs, Tenn. The couple went missing after leaving Letcher County July 3 for a home Bobby Jones owned in central Kentucky. A tenant is charged with murdering them.

“He always texts us when he gets home,” said Bill Jones. “(Sandy) just kept sending them and nothing came back. We know now what we didn’t know then. They had already been shot. He left here at 3 p.m. Somewhere between 6 and 7 p.m. probably we think they were shot. We didn’t know. Police were looking, searching.”

Bill Jones said his family first thought that Bobby Jones and Warner had simply gone somewhere for the Fourth of July.

“We knew he was to go back to work on Tuesday,” said Bill Jones. “So Tuesday morning I called Toyota. They said no. He hadn’t called in sick. He hadn’t taken any vacation. They didn’t know where he was. We knew something was wrong then.”

Police were notified. Family members posted photos of the couple on social media asking people to contact police with any information of their whereabouts.

“We thought maybe they had wrecked,” said Bill Jones. “From Tuesday until Friday morning that is what we had thought. Friday morning when they found the car and they weren’t in it, we knew there was foul play. Shortly after that is when they arrested that man.”

“The man knew he was coming,” he said. “So when he got there with that eviction notice I guess all of this took place. Bobby is very mild mannered.”

Pennington pleaded not guilty to two counts of murder Monday in Washington County District Court. He remains lodged in the Marion County Jail. Bond is set at $2 million.

Bobby Jones’s siblings, Scott Jones, Sam Jones and Becky Isom, along with Toyota employees, friends and strangers, have spent at least four days looking for their brother and his girlfriend. They have been searching from Springfield to Georgetown.

“We’re just hoping that they find them soon,” said Bill Jones, who said it would be helpful if property owners would search their land.

The Joneses have spoken with Warner’s family.

“Their family is a good family,” said Bill Jones. “They are deeply hurt. They have called us and we’ve talked with them. Everybody just wants them to be found.”

“It was a difficult day,” said Bill Jones. “I just preached about how God’s eye is on the sparrow. My sermon was no fear, no doubts, no questions. We believe in the sovereignty of God and all things happen for a reason.”

“God will take something that is evil and bad like a murder and He’ll make something good out of it,” said Bill Jones. “Joseph in the Old Testament said of his brothers treating him like they did; he said you meant it for evil. God meant it for good. That’s what we believe.”

Bill Jones said he doesn’t have hatred or bitterness toward anyone.

“This is where I felt God calling me to come to,” said Bill Jones.

Bobby Jones, who was known to people in Letcher County as B Bop, was graduated from Letcher High School in 1996. He attended Alice Lloyd College for a year and then transferred to Morehead State University.

Bobby Jones lived in Springfield before taking a job with Toyota. He has three sons — Parker, 13, and 10-year-old twin boys, Gunner and Ryder, who live with their mother in Indiana.

“He spent a lot of time with his boys,” said Bill Jones.

Bobby Jones often talked to his mother, Sandy, who asked,” How do you put into a few paragraphs, the life of a wonderful son?”

“Bobby was very close to his mother,” said Bill Jones.

Randy Mefford, a co-worker of Bobby Jones, sent a message to his brother, Sam Jones, telling him that Bobby Jones was one of the coolest guys he knew. Mefford sat beside Bobby Jones at work for the last year and a half.

“(Bobby Jones was) always in a good mood, friendly and talking about UK basketball and (his) kids,” Mefford wrote.

Bobby Jones was a University of Kentucky sports fan and golfer who enjoyed driving his Jeep and all-terrain vehicle.

Tanaya Jones, a sister-in-law of Bobby Jones, said he and Warner were the centerpiece everyone wanted around. Bobby Jones and Crystal Warner were churchgoers and family-oriented people, said Tanaya Jones. They enjoyed being outdoors and taking spontaneous trips. Both liked listening to country music. Florida Georgia Line was Bobby Jones’s favorite group, while Warner preferred Jason Aldean. She enjoyed singing.

Tanaya Jones said she had never seen someone love someone the way Warner loved Bobby Jones.

“She was perfect for Bob,” said Tanaya Jones. “You could tell how much she loved him. They were a team. She was also a great person. She was a part of our family, too. She loved him so much.”

Warner had recently quit her job with Toyota to start a real estate company with Bobby Jones. They bought and renovated homes.

With the large amount of support from Letcher County residents, Tanaya Jones said it’s as if Bobby Jones never moved out of this area.

Bill Jones said he and his family are thankful for the outpouring of love from the people of Letcher County and across Kentucky.

“Every prayer, every word of encouragement, every thought, we’re just thankful for that,” said Bill Jones.

“We want them to continue to help us in any way that anybody can help us,” said Tanaya Jones. “Please keep it up. We’re looking for Crystal as much as we are looking for Bob.”