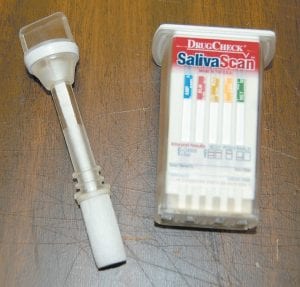 Seen in this photo is the drug testing kit being offered to parents of school students. The kits are free of charge and are available at seven locations across Letcher County. (Photo by Sally Barto)

“Just the threat of having the child come home and the parent test them might be enough to give him a second thought when he is facing that pressure to use drugs,” said Dale Morton, communications director with Operation UNITE (Unlawful Narcotics Investigations, Treatment and Education).

The “Give Me A Reason” program, which is a collaboration of Appalachia High Intensity Drug Trafficking Area (AHIDTA) and Operation UNITE, is designed to give preteens and teenagers a reason to say no when peers are doing drugs.

Said Morton: “A kid goes to school. A classmate has pills, pot. (The kid) says I can’t do it because my parents drug test me.”

Fifty percent of 12th graders say they have used drugs at least once in their lifetime, said Morton.

“Teens who stay away from drugs in high school are less likely to develop a substance abuse problem later in life,” said Morton. “That’s a known fact. Middle schoolers and high schoolers, of course, are the most vulnerable.”

“Marijuana always leads the way,” said Morton. “After marijuana, prescription and over-thecounter medications count for most of the top drugs abused by our kids. We hear about heroin. We hear about crystal meth. Pills are still king in this region.”

Dan Smoot, director of prevention and education for AHIDTA, said a single dose of a drug can affect a person’s judgment and decision making.

“The drugs are getting stronger and stronger,” said Smoot, former president and chief executive officer of Operation UNITE. “One time use does lead to addiction.”

“Every one of these can be found in our area,” said Morton.

“One of the most major things to note about this program is that there is no law enforcement involvement whatsoever,” said Smoot. “It is voluntary for parents. It is a logical and simple way to hold their kids accountable. For teens it gives them a reason to say no.”

Smoot said the drug testing kit also provides parents with an opportunity to talk to their children about drugs.

Frank Rapier, executive director of AHIDTA, created the “Give Me A Reason” program to prevent youth from experimenting with drugs and to get help for those who already use drugs.

The program was launched in Rockcastle County in October. Kits are also available in Knott, Pike and Laurel counties. The long-term goal is to have kits available in all counties in Kentucky, Tennessee, Virginia and West Virginia that are in the service area of Operation UNITE and AHIDTA. The Letcher County Chapter of the United Substance Abuse Prevention (USAP) Council has charge of the distribution sites in Letcher.

Free drug testing kits are available at the following locations: