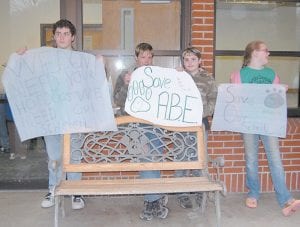 Arlie Boggs Elementary School students held signs in front of their school on March 29 expressing their interest in keeping the school open. About 250 people attended a community meeting to listen to school district officials talk about the future of the school and to express community concerns. Pictured from left are Isaiah Sturgill, 12, Timothy Maggard, 11, Jordan Sergent, 11, and Alexander Sturgill, 10.

If Arlie Boggs Elementary School has a chance of remaining open next school year it must begin attracting students who live in that district but instead go to school in neighboring Harlan County.

That’s the message Letcher County Schools Supt. Anna Craft told a crowd of about 250 people who attended a community meeting in the school’s gymnasium at Eolia on Monday night.

“I think we have smart kids here,” said Craft. “We just need more students. It is the numbers that is our concern not the quality of your school.”

“I can count 13 students on Colliers Creek that go to Harlan County schools,” said Mendy Boggs, who lives at Colliers Creek and has a seven-year-old daughter who attends ABES.

Boggs said some students go to school in a diff erent county because their parents work in Harlan County, while other students want more opportunities to play sports.

Craft emphasized at the meeting that kindergarten enrollment must increase before the next school year. Only 10 students attend kindergarten at Arlie Boggs this year, and enrollment is anticipated to be 14 next year. Craft said it is important for a large number of students to show up at kindergarten registration on April 19.

“I would love nothing better than to see 50 kindergarten kids,” said Craft.

Cornett said the school’s enrollment is now 135, but is expected to fall to 125 next school year.

“When you have an enrollment of 125 you have to start (asking), ‘Is that equitable to the rest of the district?’” said Cornett.

Craft said as enrollment declines, the quality of what can be off ered students suffers as well.

“As the numbers go down … your children are not exposed to as much material, they don’t have as many opportunities, there aren’t as many clubs, there aren’t as many extra classes,” said Craft. “That’s my big concern because I want the children in this community to have the same opportunities and the same education that they get at the other schools in Letcher County.”

Cornett said because of the decrease in students, the school will require one less teacher for next school year. The number of days an art teacher, a music teacher and a librarian will be at the school will decrease from two days a week to one day a week.

“I think we have to realize at some point if we lose too many students it becomes a danger,” said Craft.

Tammy Bullock, a Lewis Creek resident who attended Arlie Boggs as a child, is one of about 100 community members who met March 25 at a local church to form a committee and plan what should be said to school district officials at the Monday night meeting.

Bullock said she and other parents believe Arlie Boggs Elementary students are already getting a quality education, citing data that shows the school had the highest percentage of students in the district scoring “proficient” in reading in 2009.

“We want our students to have a quality education and from the data it looks like they are getting it,” she said.

Bullock also questioned the timing of this week’s meeting, which came just before students will take the Commonwealth Accountability Testing System (CATS) tests.

“How is that going to impact our test scores?” asked Bullock.

Bullock asked district officials for an enrollment number needed to keep the school open. She said parents are concerned about small children traveling in school buses across Pine Mountain as well as riding on the same bus as high school students.

“A portion of our tax dollars should be spent to maintain this building,” said Bullock. “Is the board of education willing to revisit that facilities management plan?”

Bullock said a survey of parents shows that if the school is closed the majority of parents would not send their students to another Letcher County school.

“That means the district is going to lose all the ADA (average daily attendance) money from ABES,” she said.

Calling on Letcher County Board of Education members not to “make a hasty decision or a quick vote that is going to impact our lives,” Bullock said, “we want to work with you to save our school. We need our school in our district.”

Other parents, students and other interested parties also spoke in favor of keeping the school open.

“Arlie Boggs kids never have and never will take a back seat to anyone,” said Ronnie Maggard. “We are not asking you folks to spend one dime here, we are asking you to invest.”

Sarah Maggard, an eighth-grade student at ABES, said her siblings and other family members have attended Arlie Boggs and she doesn’t want to see it close.

“I know I am going to graduate, but I don’t want to see this school shut down,” said Maggard. “It means a lot to me.”

Eolia resident Kenny Spangler said property values in the area served by Arlie Boggs would fall if the school shut. He encouraged people to continue working to try to keep the school open.

“We need to keep going and keep meeting with the board to try to keep things going,” said Spangler.

Officials representing affiliates of large coal producers with mining operations in the Eolia area spoke about the importance of keeping the school on the south side of Pine Mountain.

“Cumberland River plans to mine in this community for the next 15 years,” said Gaither Frazier, general manager of Cumberland River Coal Co., a subsidiary of Arch Mineral, the nation’s third-largest producer.

Frazier told the board that 90 percent of the coal being mined by Cumberland River Coal comes out of Letcher County.

“We know this school means a lot to our employees,” said Frazier. “We have a stake in this community and we want to continue to show our support.”

Ross Kegan, vice president of Black Mountain Resources, said 25 percent of that company’s employees live in Letcher County. Kegan, who lives in Jenkins, said coal being mined on the south side of Pine Mountain is unique because the seams are thicker and the coal is of higher quality.

“Because of the quality and quantity of reserves over there, if you will be patient I think you will see the number of jobs migrate from the north side of the mountain to the south side,” said Kegan. “That makes this school important to my employer.”

Black Mountain Resources is a subsidiary of Abingdon, Va.-based Cumberland Resources Corp., which is in the process of being purchased for $960 million in cash and stock by Massey Energy Inc. of Richmond, Va., the sixth-largest producer in the U.S.

Craft said repeatedly during the meeting that the school board has not decided to close the school.

“I do want to explain to you there has been no vote,” said Craft. “It has not been in front of the board. We came to this community because we care about it to tell you that we see a trend of numbers that you will not have as many in your school next fall and that is alarming.”

Craft said she looked through older records and found where several smaller elementary schools existed in the Cumberland River area in the 1930s.

“Back in the ‘30s I found that there were elementary schools in Colliers Creek, Eolia, Franks Creek, Lewis Creek, Upper Cumberland, Maggard and Partridge,” said Craft. “They consolidated the smaller ones into one right here because it was the best interest of the students.”

Craft said Arlie Boggs was once among the largest elementary schools in Letcher County, having an enrollment in 1978 of 343 students.

“It was a large school in the county,” said Craft. “There was a large staff. Now we are looking at your school and there is onethird of that.”

Mendy Boggs said she remains concerned that the school may be closed for good at the end of this school year.

“After last night we still feel like there is more to this than just ‘your school is in decline’ and we are looking into it,’” said Boggs.

Boggs said members of the community want to work with the school district to find a way to keep the school open.

“I think it has encouraged people to work more with the school,” said Boggs. “People are talking about how we can solve this problem. It has brought all of us together for one common goal — that is to save the school.”