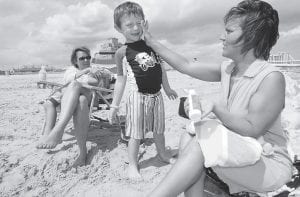 Bernadine Boyce, right, of Allentown, Pa., applies sunscreen to Bruno Barber, 5, of Atlantic City, as his mom, Natalia Barber, watches in Atlantic City, N.J., in this June 9, 2006, file photo. With summer just about in full swing, people should limit their time in the sun and take other steps to protect themselves from skin cancer as well as sunburn, dermatologists and cancer researchers say. (AP Photo/Mary Godleski, File)

The news comes as the government is finishing long-awaited rules to improve sunscreens.

The proposed rules are undergoing a final review and should be issued in weeks, FDA policy director Jeff Shuren told The Associated Press. Still, sunscreen bottles won’t look different any time soon: The proposal will be followed by a public comment period before going into effect.

New research into how the sun and genetics interact points to a possibly more important step consumers can take now to shield their children, and themselves: Check the weather forecast for the day’s “UV index” in your town, to learn when to stay indoors or in the shade.

Why? Where you live, not the every-so-often beach vacation, determines most of your UV exposure – that lunchtime stroll, children’s school recess or ball practice. UVA can even penetrate window glass. UV levels vary from state to state, even day to day, because of things like altitude, cloud cover and ozone.

“Sunscreen is imperfect,” warns Dr. Nancy Thomas, a dermatologist at the University of North Carolina who led the UV research. “Schedule activities when UV irradiation is not quite so high.”

Melanoma is the most lethal skin cancer. It will strike almost 60,000 Americans this year, and kill some 8,100. Cases have been on the rise for three decades, and while it usually strikes in the 40s or 50s, doctors are seeing ever-younger cases, occasionally even in children.

Scientists are studying the interaction of genes and UV exposure in melanoma patients in the U.S. and Australia – and initial results suggest staying in the shade in early life is even more important than previously realized. Thomas analyzed tumor genes from 214 melanoma patients now living in North Carolina. Colleagues at the National Center for Atmospheric Research in Boulder, Colo., used satellite data to track average UV radiation – encompassing both UVA and UVB rays – in the different towns and states where those patients had lived at birth, age 10, age 20 and so on.

The result: Patients with the most common known melanoma mutations, called BRAF mutations, also had the highest UV exposure by age 20. Interestingly, they also had the most moles, another important melanoma risk factor.

What does that mean? It’s not clear yet, but young, rapidly growing skin may be particularly vulnerable to damaging UV rays, especially as moles are developing, Thomas says. Or maybe early childhood sun exposure spurs moles to develop in the first place.

While sun exposure for young adults played some role, too, the association with BRAF disappeared at age 30.

But that isn’t a license for adults to sunbathe: Another melanoma subtype, characterized by mutations in a gene called NRAS, is strongly linked to UV exposure by age 50, the study found.

Here’s the problem: Until recently, sunscreens have filtered out mostly UVB rays that cause sunburns, not UVA rays, meaning people who depended only on sunscreen to prevent skin cancer may have gotten a false sense of security.

Today, many sunscreens promise “broad-spectrum” protection against UVA rays, too. But the government doesn’t yet have testing requirements in place to prove that UVA protection.

The term broad-spectrum “means nothing. Anybody can make that claim,” says a frustrated Dr. Darrell Rigel of New York University, a past president of the American Academy of Dermatology, which has long pushed to change that.

The soon-to-come FDA proposal will keep the SPF, or “sun protection factor,” ratings on sunscreen bottles that refer only to UVB protection – but add a UVA rating, too, says Shuren.

Until then, dermatologist Rigel has some advice:

+ Use enough sunscreen. An adult needs the equivalent of a full shot glass, and a young child a good tablespoon full. Most people put on too thin a coat to get good UVB coverage, much less whatever UVA protection a brand might offer.

+ While official recommendations say wear at least an SPF-15 sunscreen daily, a super-high SPF will counter some of the thin-coat problem.

+ Products with the ingredient Helioplex – a more sun-stable mix of the sunscreen ingredients avobenzone and oxybenzone – seem to provide longer-lasting UVA protection, although they can be more expensive. Another certified anti-UVA ingredient, Mexoryl, currently is sold only in sunscreen-containing moisturizer in the U.S.; it has long been sold in Europe.

+ Apply sunscreen a half-hour before going outside. It takes that long to start working.