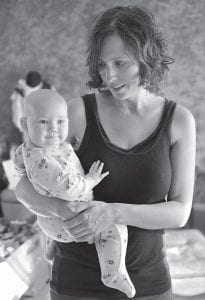 Kandace O’Neill poses with her 7-month-old daughter, in Lakeville, Minn. O’Neill’s views on child vaccinations are shared by many parents who don’t follow federal vaccine advice. Her 5-year-old son has had no vaccinations since he turned 1 and the baby girl has received none of the recommended shots. (AP Photo)

By age 6, children should have vaccinations against 14 diseases, in at least two dozen separate doses, the U.S. government advises. More than 1 in 10 parents reject that, refusing some shots or delaying others mainly because of safety concerns, a national survey found.

Worries about vaccine safety were common even among parents whose kids were fully vaccinated: 1 in 5 among that group said they think delaying shots is safer than the recommended schedule. The results suggest that more than 2 million infants and young children may not be fully protected against preventable diseases, including some that can be deadly or disabling.

The nationally representative online survey of roughly 750 parents of kids age 6 and younger was done last year and results were released online this week in the journal Pediatrics. They are in line with a larger federal survey released last month, showing that at least 1 in 10 toddlers and preschoolers lagged on vaccines that included chickenpox and the measles mumps-rubella combination shots. That survey, also for 2010, included more than 17,000 households.

The Pediatrics survey follows other recent news raising concerns among infectious disease specialists, including a study showing the whooping cough vaccine seems to lose much of its effectiveness after just three years — faster than doctors have thought — perhaps contributing to recent major outbreaks, most notably in California. Also, data reported in September show that a record number of kindergartners’ parents in California last year used a personal belief exemption to avoid vaccination requirements.

Kandace O’Neill is a Lakeville, Minn., mom whose views are shared by many parents who don’t follow federal vaccine advice. Her 5-year-old son has had no vaccinations since he turned 1, and her 7-monthold daughter has received none of the recommended shots.

“I have to make sure that my child is healthy, and I do not want to put medications in my child that I think are going to harm them,” said O’Neill, who was not involved in the survey appearing in Pediatrics.

O’Neill said she’s not an extreme anti-vaccine zealot. She just thinks that parents — not doctors or schools — should make medical decisions for their children.

Study author Dr. Amanda Dempsey, a pediatrician and researcher at the University of Michigan, said vaccine skepticism is fueled by erroneous information online and media reports that sensationalize misconceptions. These include the persistent belief among some parents about an autism vaccine link despite scientific evidence to the contrary and the debunking of one of the most publicized studies that first fueled vaccine fears years ago.

Some parents also dismiss the severity of vaccinepreventable diseases because they’ve never seen a child seriously ill with those illnesses.

But vaccine-preventable diseases including flu and whooping cough can be deadly, especially in infants, said Dr. Buddy Creech, associate director of Vanderbilt University’s Vaccine Research Program. Creech has two school-aged children who are fully vaccinated and a newborn he said will be given all the recommended vaccinations.

“From being someone in the trenches seeing children die every year from influenza and its complications … I would not do a single thing to risk the health of my kids,” he said. Creech has served on advisory boards for vaccine makers and has accepted their research money.

Dempsey, the survey’s lead author, has been a paid adviser to Merck on issues regarding a vaccine for older children but said that company made no contributions to the survey research.

Knowledge Networks conducted the survey, which had an error margin of plus or minus 5 percentage points.

Dr. Larry Pickering, an infectious disease specialist at the Centers for Disease Control and Prevention, said the new survey is important and well done, and indicates that doctors need to do a better job of communicating vaccine information to patients.

Pickering said he supports the idea of parents being actively involved in medical care for their children, but cautioned: “ If they’re going to do that, they need to be fully informed about the risks and benefits of vaccines and need to obtain the information from a valid source.”