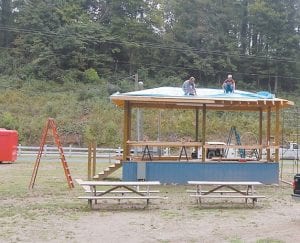 PARK IMPROVEMENTS — City of Whitesburg employees Joe Miller (left) and Danny Halcomb were preparing to put a new metal roof on the gazebo at Riverside Park In Whitesburg on Aug. 17. The gazebo will be used as a sound booth during concerts. The workers anticipate that the project will be completed in time for the Riverside Days Festival, which is set for this weekend. (Photo by Sally Barto)