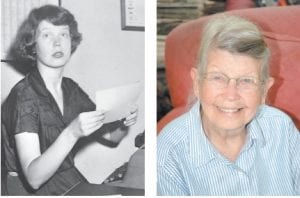 Mountain Eagle publisher Pat Gish died April 13 at age 87. The photo at left was taken in the late 1940’s while she was beginning her career as a reporter at The Lexington Leader. The photo at right was taken recently.

Pat Gish, who with her late husband Tom published this newspaper since 1957, died peacefully on April 13 at the age of 87, surrounded by family members at her home in Thornton.

“Pat Gish’s life is a profile in courage, endurance, and dogged hard work, all driven by a deeply principled commitment to the idea that there is nowhere a free people unless there is a free press,” wrote former Mountain Eagle reporter Jim Branscome, in one of several tributes published in this week’s issue (see page 4).

“We are diminished today by the death of Pat Gish,” commented Laurie Ezzell Brown, editor-publisher of The Canadian (TX) Record and a winner, in 2007, of the Tom and Pat Gish Award established by the Institute for Rural Journalism at the University of Kentucky. “She and her husband, Tom, were real journalistic warriors of the kind too rarely seen in this age in which news is ‘monetized’ and valuable reporting resources are allocated according to page clicks. Pat and Tom Gish reported the real news, regardless of whether it was either profitable or popular — and despite considerable risk to both life and livelihood.” 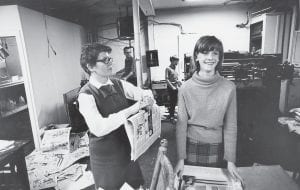 Pat Gish, left, was working with daughter Sarah to fold pages of The Mountain Eagle when this photo was taken during the late 1960s. Pictured in the background are husband Tom and son Ben running the press.

A Lexington Herald-Leader obituary by Bill Estep noted: “Tom Gish was publisher and editor of The Mountain Eagle in Whitesburg, but Mrs. Gish was his inseparable partner in the publication, which on their watch bucked entrenched political interests, exposed corruption and was the first newspaper in eastern Kentucky to seriously challenge the abuses of surface mining.”

Tom Gish, who died in 2008, freely acknowledged that without Pat, The Mountain Eagle would have gone under long ago. Although Tom wrote most of the editorials, Pat did most of the reporting and editing and managed the business side, while also mothering their five children and, for several years, working as founder and director of a federally funded affordable housing initiative — a job that required her to travel to Louisville on weekends for two years to earn a graduate degree. 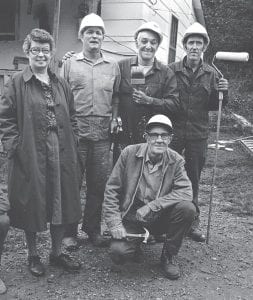 This photograph, which shows Pat Gish and fellow employees at Eastern Kentucky Housing Development Corporation was taken in 1979 after EKHDC had built its 170th new home and repaired its 3,500th home in Leslie, Knott Letcher and Perry counties. The agency was merged into what is now HOMES Inc. after losing its funding during the Reagan administration in 1983.

“Best multi-tasking saint of an editor, housing expert, wife and mother I have ever known,” commented Mike Clark, a former Eagle staffer who is currently the interim director of Greenpeace. “How Pat balanced all those roles without sleep or peace or rest is beyond me.”

Patricia Ann Burnett Gish was born on January 11, 1927, in Paris, Bourbon County, to Georgia and Elmer Burnett. She launched her career in journalism at age 13, working as a proofreader at a Danville paper after the editor heard she was a good speller.

She graduated from Lafayette High School in Lexington; attended the University of Kentucky, majoring in journalism; edited the Kentucky Kernel student newspaper while also working part-time as a proofreader for the Lexington Leader, a predecessor of today’s Herald-Leader; met Tom Gish, an undergraduate from Seco, Letcher County, who at the time was majoring in mining engineering before switching to journalism; and graduated in 1947.

Pat went to work at the Leader as a general assignment reporter. Tom worked for the United Press, covering state politics from UP’s Frankfort bureau. They were married in Lexington on April 3, 1948.

Tom wanted to return to eastern Kentucky. In 1956, when the owners of The Mountain Eagle decided to sell, Tom and Pat scraped together the money to buy it. After moving to Whitesburg, they published their first issue on January 1, 1957.

Although the Gishes had no plans to become crusading journalists, The Eagle soon became embroiled in controversy when they insisted on covering meetings of the local school board and fiscal court, previously held behind closed doors. The Eagle eventually prevailed, but at a cost: the Gishes were attacked as outsiders, local businesses withdrew advertising, and as the coal industry declined and the region sank deeper into poverty, the paper struggled to survive.

But Pat and Tom stuck it out, and The Eagle earned national attention for its coverage of poverty, education, stripmining, substandard housing, and coal mine health and safety issues, among others. The Gishes worked as an inseparable team, reporting, editorializing, guiding visiting reporters and officials through eastern Kentucky — and raising five children, all of whom helped out at the paper.

Pat persuaded the federal Office of Economic Opportunity (OEO) to fund its first rural housing demonstration project in Letcher County. She became the director of the Eastern Kentucky Housing Development Corporation ( EKHDC) in 1968. She entered into a pioneering partnership with Yale Architecture School, whose graduate students designed affordable modular housing suitable for the rugged terrain of eastern Kentucky. EKHDC also launched a homerenovation program and built a factory in Letcher County, hiring and training unskilled jobless men with families to support.

Even while overseeing EKHDC’s projects (the company eventually built and renovated thousands of homes), Pat commuted to the University of Louisville on weekends for two years while earning a master’s degree in community development.

When federal support for poverty programs was slashed in the 1980s, Pat oversaw the merger of EKHDC with another home-renovation organization and returned to full-time work at The Eagle. (Truth to tell, she had somehow managed two essentially full-time commitments for many years.)

Over the years, Tom and Pat received widespread recognition and many awards for their stubborn insistence on investigating and reporting whatever concerned them, regardless of the consequences — which included a 1974 arson attack instigated by a local policeman after The Eagle reported on police harassment of Letcher County teenagers. (After the attack, which nearly destroyed The Eagle’s offices, they changed the paper’s motto from “It Screams” to “It Still Screams.”)

About ten years ago the Gishes turned over the editorship of the paper to their son Ben, enabling them to spend more of their time at the home they built in Thornton, where cooking, gardening, enjoying family and welcoming former Eagle staffers were major activities. Their son-in-law Freddy Oakes is the paper’s longtime advertising manager; granddaughter Sally Barto is a reporter.

In 2005 the Institute for Rural Journalism and Community Issues at the University of Kentucky established the Tom and Pat Gish Award, given annually for “courage, integrity and tenacity in rural journalism.”

Tom Gish died on November 21, 2008, at age 82. Although she had Alzheimer’s disease, Pat remained closely involved in family life, and rarely missed reading an issue of The Eagle with the intensity of a born proofreader. On April 13, a life of rare courage, integrity and tenacity came to an end.

Visitation begins at 6 p. m. Wednesday, April 16, at Letcher Funeral Home in Whitesburg, with the funeral at 1 p.m. Thursday, April 17, at the Graham Memorial Presbyterian Church in Whitesburg.