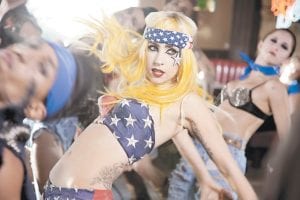 It wasn’t long ago that the music video was on life support.

MTV — which held its 27th annual Video Music Awards earlier this week — phased out videos in favor of reality programming and other shows that attracted better ratings. At the same time, the music industry was collapsing and slashed budgets no longer had room for elaborate clips.

But recently, the music video has had a revival. Watching music videos has become a central aspect of Internet usage. Music blogs and social media have greased the channels, facilitating the quick, easy spreading of videos, especially those with arresting or controversial visuals. People even buy clips on iTunes.

Lady Gaga and Beyonce go on a scantily clad murderous rampage with the nearly 10-minute “Telephone”; MGMT wanders through the desert with a digitally created creature in “Congratulations”; Erykah Badu strips while strolling the path of President John Kennedy’s assassination in “Window Seat”; MIA depicts a war on terror against redheads in “Born Free.”

All of these videos exploded on the Internet and became watercooler moments. Cee Lo’s recent and unprintable hit (titled “Forget You” for radio) went viral with a video of only its lyrics. And Beyonce’s “Single Ladies (Put A Ring On It)” became so iconic it spawned countless imitators and even had then President-elect Barack Obama imitating the hand choreography.

“We’re entering another golden era for music videos,” says Saul Austerlitz, the author of “Money for Nothing: A History of the Music Video from the Beatles to the White Stripes.”

“They’ve become part of the cultural discourse again in a way that’s reminiscent of the heyday of the music video, from the early ‘80s to the mid ‘90s.”

Today’s audiences can be enormous. Shakira, who last year debuted a music video on Facebook, was “blown away” when her video for the official song of the World Cup, “Waka Waka (This One’s for Africa)” — a colorful mix of dancing and soccer star cameos — was nearing 100 million views on YouTube.

“It can take on a life of its own online,” says Shakira. “And it inspires us artists to be even more creative. With access to so many videos, we need to challenge ourselves to surprise our fans.”

The video, which was distributed by the music video and live music website Vevo, has gone on to be watched by more than 173 million people, good enough for the fourth most-viewed video ever on YouTube.

In fact, four of the five mostviewed clips on YouTube are music videos released in the last year. (Justin Bieber and Lady Gaga top the charts.) Though that’s partly because Vevo (which shares a small percentage of advertising revenue with YouTube) tabulates view counts across platforms, it’s still a striking example of the music video’s dramatic comeback. It’s a long way beyond the novelty videos of OK Go that followed You- Tube’s debut in 2005.

“If it wasn’t for YouTube, the online video space would not be where it is today,” says David Kohl, executive vice president of sales and customer operations at the Sony and Universal co-owned Vevo.

At the center of music video’s earlier, headier times was Hype Williams, who — often with his trademark fisheye lens — created much of the iconography of hip-hop. Several of his videos are typically considered among the form’s best, like Missy Elliott’s “The Rain (Supa Dupa Fly)” and Busta Rhymes “Put Your Hands Where My Eyes Could See.”

But he grew disillusioned with the commercialization of music videos and the recycling of imagery. Williams was coaxed back into music video by Kanye West and has remained active, including recently directing the Jay-Z’s “Empire State of Mind,” watched by nearly 60 million and nominated for three VMAs.

“It’s a diff erent time,” says Williams. “It’s an opportunity to find it all over again. I didn’t really think that was possible until recently, seeing things like this Arcade Fire clip. It shows you that it can be more.”

Released two weeks ago, the Arcade Fire video is titled “The Wilderness Downtown” and set to the band’s song “We Used to Wait.” It’s a new kind of video, a kind particularly suited to the medium of the Web.

“It speaks volumes about where music video is going,” says Williams, who’s happy to pass the torch. “It’s a young man’s game.”

At the website dedicated to the film (www.thewildernessdowntown. com), a viewer inputs his or her childhood home address. The film starts with a hooded figure running down golden suburban streets. Another browser window opens full of fluttering birds. Others pop open, too, that use Google Street View and Google Maps to show the old neighborhood. At the end of the film, the viewer is urged to write a letter to his or her young self.

Within days, the site received some 20 million hits and 3 million unique views.

The video, made possible by the Web programming language HTML5, was directed by Chris Milk, who has previously done more traditional videos for Gnarls Barkley, West and others. He has been thinking about using the interactivity of the Web for music videos and earlier this year released “The Johnny Cash Project,” a Web-only video that gathers portraits of Cash submitted by fans and sets them to the song “Ain’t No Grave.”

“Because we’re in this transitional moment, we’ve all been making music videos as if we’re making them for a television broadcast,” says Milk. “But really the Web is a totally diff erent canvas from broadcast. It allows for a whole diff erent set of rules.”