Newest iPods get it right 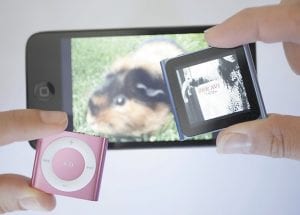 Shown are new Apple iPods from left, Touch and the Shuffle.

By now, Apple’s introduction of new iPods each fall is about as surprising as kids going back to school.

And, as usual, many of the changes CEO Steve Jobs announced earlier this month were expected, such as the addition of cameras to the iPod Touch.

But Apple Inc. took some risks this time with its lineup, too. It cut the video recording and playback features from the Nano to shrink it while adding a touch screen, and went back in time stylistically to rework the tiny Shuffle.

The results, as expected, are awesome across the board.

IPod Nano ($149 or $179): The latest Nano has gotten the biggest makeover of the bunch, trading in its rectangular body for a small square and eschewing the traditional iPod click-wheel controls in favor of a touch screen flanked by a few buttons.

I thought that having such a teeny touch screen — about 1.5 inches diagonally — would be annoying. It turned out to be slightly irksome at first but nearly as intuitive as the old click wheel once I got used to swiping it to find my way around.

If the old Nano said, “Take me with you,” the new Nano screams, “Only a fool would leave me at home!” It’s less than half the size of the old Nano and fits in even the smallest pocket. And it finally comes with a built-in back clip, so you can attach the player to your shirt or pocket when you’re exercising or walking around. Adios, expensive clip case.

The built-in pedometer, introduced on the last Nano, seems like a better idea now that the gadget has a more portable body.

You also don’t need to worry whether you’ve clipped it on upside down, as Apple smartly included a feature that lets you flip the screen’s orientation by twisting two fingers on the screen.

I thought I’d miss the video camera included on the previous Nano since I don’t like having options taken away from me. But after a little while I totally forgot about it. It would have been neat if Apple at least kept the video playback option, but such a small screen — about 1.5 inches diagonally — is hardly ideal for watching episodes of “Glee.” The old screen, at 2.2 inches, was diminutive but did the trick if I needed a video fix on the fly.

Apple says the Nano, which comes with 8 or 16 gigabytes of storage, should give you up to 24 hours of music playback; I got close to 15 hours from a single charge when listening to music and viewing photos.

IPod Touch ($229-$399): As with the last iPod Touch, the new version is much like an iPhone without the phone — a great alternative if you want to avoid a twoyear service contract, especially since the phone part is often derided as the iPhone’s weakest suit.

Like the iPhone 4, the new Touch has a gorgeous, super-sharp display that is great for surfing the Web and watching videos. It’s stocked with Apple’s newest mobile processor and comes with 8, 32 or 64 GB of storage.

The new iPod Touch also follows the iPhone 4’s lead by adding cameras in the front and back. This means you can take photos and HD-quality videos and conduct video chats with other owners of the new Touch and latest iPhone.

The cameras bring the Touch to a whole new level. Before, it was a slick multimedia player that could access the Internet and download apps over Wi-Fi. Now, it’s a potential replacement for a simple point-and-shoot — though, sadly, it still lacks a flash — and a better a communication tool.

Using FaceTime on the Touch is pretty sweet. Sure, video chat has been around for a while, and it’s already available on the iPhone 4. But there’s still something awesome about having video chat right in your pocket, assuming you are in a Wi-Fi hotspot. Since the Touch doesn’t have a phone number that people can call for a FaceTime chat, you must choose which e-mail address (or addresses) people can use to reach you.

The Touch also comes with Apple’s new Game Center app, which lets you keep track of your gaming scores and play games against friends.

I had fun playing the fruit-slicing game “Fruit Ninja” against my iPhone-brandishing colleague Peter in New York, but it wasn’t seamless. We both noticed delays in seeing what the other had just done.

Still, you’ll have plenty of time to challenge others and do everything else: The Touch’s battery is rated for up to 40 hours of music or seven hours of video playback, and I got over 13 hours out of it when doing everything from playing games to perusing Apple’s iTunes Store.

IPod Shuffle ($49): At first glance, the new iPod Shuffle looks suspiciously like an older version of the same gadget, with its circular control panel and wee rectangular body.

Looks can be deceiving, though. It’s actually a solidly updated device, both compared with its doppelganger, the Shuffle Apple released four years ago, and with the previous Shuffle that depended on controls attached to an earbud cord.

I like this return to the circular controls, which make it easy to navigate from song to song and pump up (or down) the jam. There’s a button for voiceover features on the side, which speak over the music to tell you what song you’re listening to.

And the $49 price tag — $10 lower than the previous Shuffle with the same 2 GB storage capacity — can’t be beat. Sure, it only has room for about 500 songs, and Apple is no longer off ering a 4 GB Shuffle, but it’s more than enough to get you through plenty of workouts and commutes.

The Shuffle is supposed to get up to 25 hours of battery life; after using it for more than 15 hours, I clicked the voiceover button and a stilted male voice told me it still held a 25 percent charge.

Though I try to keep an eyebrow raised, year after year Apple convinces me of the merits of its latest iPods. There’s always room for improvement (I’d love more camera settings and a flash on the Touch, for example), and I bet Apple is already figuring out what problems to solve and features to add in the next versions. But they’re still far better than the competition — no surprise there.