By DAVID BAUDER
The Associated Press 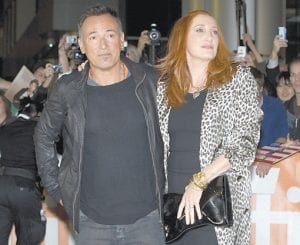 Bruce Springsteen and wife Patti Scialfa were photographed arriving for the gala premiere of the film “The Promise: The Making of Darkness on the Edge of Town” at the 2010 Toronto International Film Festival in Toronto recently. (AP Photo/The Canadian Press)

Bruce Springsteen doesn’t imagine his three children, ranging in age from 16 to 20, would be that interested in a new HBO documentary on his 1978 album “Darkness on the Edge of Town.”

Maybe they will later, since the movie is partly for them.

“Do you really want to watch your dad, watching thousands cheer your parents?” he said. “Nobody wants to see that. Watching people boo your folks, that would be something worth coming to see.”

For his fans, the film “The Promise: The Making of ‘Darkness on the Edge of Town’” is an intriguing peek, supplemented with home video from the time, into the creative process of a music legends at a key time in his career. Burdened by a management lawsuit and brooding over newfound fame at age 27, Springsteen and his E Street Band produced a taut treatise on growing into adulthood within a faltering economy. The film debuts Oct. 7 at 9 p.m.

Getting there was anything but easy. Springsteen wrote and discarded far more songs than he used — fans will be able to hear many of them later this fall — as he whittled the band’s sound from expansive to lean and made sure the disc hung together creatively.

One night a bleary-eyed Springsteen forced poor Max Weinberg to repeatedly hit his snare drum, searching for a sound he imagined in his head but could never quite get on tape.

“Madness has its rewards — if in the end you don’t destroy yourself,” Springsteen said. “I had an idea but a lot of it, looking back now, probably could have been dispensed with and everyone would have been left with a little more of their sanity. But that was how we made those records. I believed at that time that you had to work hard at something. I didn’t trust anything that came too easily.”

That may have tortured a few band members but the attitude made him think hard about what he wanted to say and made for well-constructed songs.

“I wanted them to last and they did last,” he said. Along with the title cut, the album features “Badlands,” ‘’Prove It All Night” and “Racing in the Street.”

A friend at the time, Barry Reebo, frequently followed Springsteen and his gang with a video camera, back to when the rocker played small clubs. No one thought twice when Reebo hung around the studio during the “Darkness” sessions. He didn’t use big lights. Sometimes it seems the musicians forgot he was there.

After reforming the E Street Band a decade ago following a hiatus, Springsteen began thinking about video archives of their work, particularly for younger fans who knew nothing of their epic late 1970s performances.

Reebo hadn’t sold his footage, and Springsteen was surprised at all he had. He struck a deal, and filmmaker Thom Zinny made “The Promise” by mixing the old tapes with current recollections from Springsteen and his band.

Success was fine, but he mistrusted it. He felt safe among the places and people he grew up with in New Jersey.

He pursued it with an almost maniacal sense of purpose.

Family was also on his mind. He didn’t feel he really knew his parents and what they went through — the song “Factory” was about his dad’s blue collar life — and “The Promise” exists in part so Springsteen’s children will have a document of how their father handled the curiosity of his own teen years.

The “Darkness” album came three years after “Born to Run,” a lifetime in that musical era. For much of that time, Springsteen was prevented from releasing music due to a lawsuit involving his former manager, Mike Appel. Appel was a big music fan with his own vision for Springsteen’s career, and the lawsuit was strictly about control, Springsteen said.

Appel even appears in “The Promise” and issues what could be interpreted as an admission that he had been wrong. “I had strong ideas,” Appel said. “In the end, you have to say, ‘Mike, who’s the artist?’”

Springsteen laughs when he’s asked if he’s ever gotten an apology. “No,” he said. “I’ve never asked him to and he doesn’t have to. We’re very good friends.”

It’s a season of “Darkness” for Springsteen. On Nov. 16, Columbia will release two products centered on the period. One is “The Promise,” a two-CD set of material recorded then that never made the original 10-song album. It contains 21 songs, including “Fire,” which became a hit for the Pointer Sisters, and “Because the Night,” which Patti Smith took, added some of her own lyrics and turned into the biggest hit of her career.

The songs likely formed the bones of an album never made between “Born to Run” and “Darkness.”

A more extensive package, formed to look like the notebooks Springsteen used for song lyrics at the time, contains those two CDs and a remastered version of “Darkness on the Edge of Town.” It also contains three DVDs with the HBO documentary and four hours of concert footage.

The material includes an entire 26-song Houston concert from 1978, and a 2009 recording of Springsteen and his band performing the “Darkness” album in its entirety at an empty Paramount Theater in Asbury Park, N.J.

Springsteen described his recording process at the time as “making a huge splatter painting and standing back and editing and shaping the way I wanted it to come out.”

The outtakes “really hold together as a body of work because they all came out of the same sessions, the same sounds and tones. … It’s an interesting bunch of music that I hope the fans enjoy.”