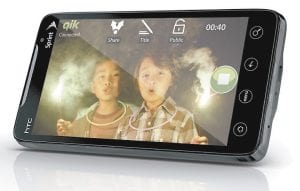 Sprint Nextel Corp. is the first carrier to beat the drum for fourthgeneration wireless technology, and it’s getting louder as it gets closer to releasing its first 4G phone, the EVO, on June 4. (AP Photo/Sprint)

Cell phone companies are about to barrage consumers with advertising for the next advance in wireless network technology: “4G” access. The companies are promising faster speeds and the thrill of being the first on the block to use a new acronym.

But there’s less to 4G than meets the eye, and there’s little reason for people to scramble for it, at least for the next few years.

Sprint Nextel Corp. is the first carrier to beat the drum for fourthgeneration wireless technology. It’s releasing its first 4G phone, the EVO, on June 4.

In the fall, Verizon Wireless will be firing up its 4G network in 25 to 30 cities, and probably will make a big deal of that. A smaller provider, MetroPCS Communications Inc., is scheduled to introduce its first 4G phone around the same time.

Broadly speaking, it’s a new way to use the airwaves, designed from the start for the transmission of data rather than phone calls. To do that, it borrows aspects of the latest generation of Wi-Fi, the short-range wireless technology.

For consumers, 4G means, in the ideal case, faster access to data. For instance, streaming video might work better, with less stuttering and higher resolution. Videoconferencing is difficult on 3G and might work better on 4G. Multiplayer video games may benefit too.

Other than that, it’s difficult to point to completely new uses for 4G phones — things they can do that 3G phones can’t.

Instead, the upgrade to 4G is more likely to enhance the things you can already do with 3G, said Matt Carter, president of Sprint’s 4G division.

“View it as the diff erence between watching regular TV and high-definition TV,” Carter said. “Once you’ve experienced highdefi nition TV it’s hard to go back to standard TV. It’s the same sort of thing here.”

So the improvement from 3G to 4G is not as dramatic as the step from 2G to 3G, which for the first time made real Web browsing, video and music downloads practical on phones. The introduction of 3G started in earnest about five years ago, but it isn’t complete — AT&T Inc. and T-Mobile USA still have little rural 3G coverage, for instance.

There’s an important caveat to the claim that 4G will be faster, as well. It will definitely be faster than the 3G networks of Sprint and Verizon Wireless — about four times faster, initially. But the other two national carriers, AT&T and T-Mobile, are upgrading their 3G networks to off er data-transfer speeds that will actually be higher than the speeds 4G networks will reach this year or next.

That means that rather than focusing on real speeds, Sprint and Verizon will try to frame their marketing around the “4G” term, said Dan Hays, who focuses on telecommunications at management consulting firm PRTM.

“It’s a terrible story from a consumer standpoint, because it’s tremendously confusing,” he said.

The fact that Verizon Wireless and Sprint are adding fresh spectrum may be more important than the fact that they are using it for 4G service. No matter if used for 4G or 3G, new spectrum means the companies can accommodate more data-hungry devices such as smart phones.

AT&T’s network is already staggering under data congestion caused by the iPhone in New York and San Francisco. The carrier has made relieving the congestion a top priority this year, and its 3G upgrades are part of that process. (As an aside, there is a lot of talk of a coming “iPhone 4G.” Apple Inc. will most likely release the fourth generation of the iPhone for AT&T’s network this summer, but it’s virtually certain that it will not be able to use a 4G wireless network. It likely won’t be called the “iPhone 4G” either.)

There’s another, more subtle benefit to 4G. While it’s not always faster than the best 3G when it comes to helping you download a big file in less time, it is definitely faster in the sense that it takes less time to initiate the flow of data to you. What that means is that 4G is faster for quick back-and-forth communications. You wouldn’t notice this when surfing the Web or doing e-mail: We’re talking delays of 0.03 second rather than 0.15 second. But it could mean that 4G will work better for multiplayer gaming, where split-second timing is important. Even phone calls could benefit from shorter audio delays.

Sprint and Verizon are taking diff erent routes in 4G. Sprint owns a majority of Clearwire Corp., which is building a network using WiMax technology. Once seen as very promising, WiMax looks set to be a niche technology, and WiMax devices like the Sprint EVO phone won’t be able to use networks built using the dominant 4G standard, called LTE, for Long Term Evolution. Verizon and MetroPCS plan to use LTE, as does AT&T, starting next year. T-Mobile says it will probably use LTE eventually. Even Sprint hasn’t ruled out using LTE eventually, because the technology has huge momentum.

In five years or so, many phones are likely to have 4G capabilities, but they’ll complement it with 3G. Rather than a sudden revolution, consumers are likely to experience a gradual transition to the new technology, with increasing speeds. But for now, 4G is no magic bullet.