‘As the World Turns’ stops spinning after 54 years 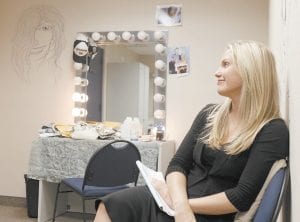 Cast member Terri Colombino reminisced in her dressing room during the final weeks of taping for CBS’s soap opera “As the World Turns,” at JC Studios in New York. The final episode of the soap opera, which has been running since 1956, will air on Sept. 17. (AP Photo)

You can view the clip on You- Tube: Dr. Bob Hughes lunching with a fellow doctor in a scene aired live on “As the World Turns” the afternoon of Nov. 22, 1963.

“Shall we get a menu?” Hughes says to his dining companion. “Waiter! I’d like to order. I’m kind of hungry.”

That scene was the last the TV audience would see of “As the World Turns” that day as CBS News seized the schedule for continuous coverage of President John Kennedy’s assassination.

The young, dark-headed actor who played Dr. Bob, as well as the rest of the cast, completed the show shielded from both the fact of its pre-emption and the terrible reason why.

Only after the episode’s final fade-out did they learn of the tragedy, as the actor portraying Dr. Bob, Don Hastings, recalled.

Now 76 and handsomely silverhaired, Hastings was in his dressing room between scenes at the Brooklyn studio the series has called home the past decade. He was still playing Dr. Bob — lately the head of Oakdale Memorial Hospital and, as always, endowed with a perfect bedside manner — just a few months shy of 50 years after landing the part. 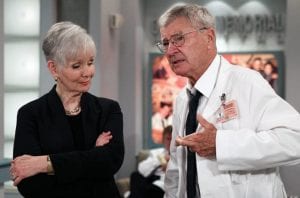 Kathryn Hays, left, watched colleague Don Hastings cross his fingers during the taping of an episode of “As the World Turns,” at JC Studios in New York. (AP Photo)

But Hastings won’t get to reach his half-century milestone in October. On Sept. 17, TV’s oldest daytime drama (airing weekdays at 2 p.m. until then) will fold.

“It’s been a job and a home and friendships for 50 years,” said Hastings, an avuncular, era-spanning presence as he pondered the series’ end. “I don’t think it’s hit me yet.”

The summer after CBS’ “Guiding Light” was cut down after 72 years on radio and then television, the doomsday scenario that has plagued soaps for decades has now claimed “ATWT.”

Used to be, there were a dozen or more daytime dramas on U.S. networks. Soon there will be only six, with only ABC’s “One Life to Live” still originating in New York. The ratings for all of them are a fraction of what they once were, and continue in a downward spiral. “ATWT,” ranked last, this season is averaging 2.4 million viewers, whereas in the 1991-92 season, it drew 6.7 million viewers, according to the Nielsen Co.

“This show was created in the 1950s, and now there are diff erent viewing patterns, different economic models, and we’re all fighting a tough fight to stay in the business,” said Chris Goutman, “ATWT” executive producer since 1999. “Daytime has been in trouble for a long time, and we’re part of that bigger picture.

“But when was the time that I thought we were fighting a losing battle? Never. I always think we’re going to win the battle. But this time we didn’t.”

Last December, CBS made it official, a death decree that, paired with the demise of “Guiding Light,” marks the exit of the production arm of Cincinnati-based Procter & Gamble Co. from the soap opera business. This, of course, is a company for which the term “soap opera” was coined in the radio era when it began deploying such shows to advertise its detergent and soap products. (“ATWT” took over the studio space where yet another Procter & Gamble soap, “Another World,” was taped until NBC canceled it in 1999.)

Like many soaps, “ATWT” is set in a bucolic but scandal-beset Midwestern burg — in this case, Oakdale, Ill. Having always centered on two families — the Lowells and the Hugheses — it premiered April 2, 1956, with mildmannered Nancy Hughes voicing the words, “Good morning, dear.” She was played by Helen Wagner, who was among those seen on that fateful episode the day Kennedy died and made occasional appearances as recently as this spring. She passed away in May at 91.

Hastings and Eileen Fulton (who joined “ATWT” in May 1960 as the vixenish Lisa Grimaldi) are now the senior cast members.

Longevity, of course, is a hallmark of soap operas. Unique in the otherwise mercurial world of TV, the life spans of successful soaps are measured in decades, even generations, not fleeting seasons. Firm bonds are formed by viewers with a soap and its characters, as well as the actors who play them — and keep playing them.

“The idea of being tied down for a whole year challenged my sense of an actor as a gypsy,” said Kathryn Hays, who in 1972 returned to New York from California to take the role of Kim Hughes.

“I came back with two suitcases — one full of clothes, one full of pots and pans,” Hays recalled. She never left. (For the last quartercentury, Kim has been married to Dr. Bob.)

“It’s a diff erent script every day and the life that you’re leading in the show moves on, and over a period of years, it’s like you’re living another life,” she said, trying to describe her job’s appeal.

“But now your character is no longer going to be there,” she went on, her eyes welling, her voice choking up. “You’ve been living that character for almost 40 years. You invest yourself in that character. I know who she is.” Her voice dropped to a theatrical whisper. “She’s mine.”

Like Hays, Marnie Schulenburg has come to value the cumulative power of playing a soap character just three years on the show.

As Alison Stewart, a perky hospital aide and former crystal-meth addict, the 26-year-old Schulenburg noted that on daytime, “when your character has memories, or you’re talking about something she’s experienced, you’ve actually been through it with the character in the past — so these are real memories. It’s really cool.”

Schulenburg is nominated for an acting award at Sunday’s Daytime Emmy ceremony — one of 13 nominations snagged by “ATWT.”

“I feel like Alison is another person,” Schulenburg said. “That’s what makes me sad: I’m going to miss her.”

“I think I was in shock for a while,” said Terri Colombino, who for 12 years has played the oft-wed, ever-looking-for-love Katie Peretti.

The idea of parting company with Katie “feels like a death,” she said, wiping her eyes — “which is good that we’re having a sad story line at the end, so we can all kind of work through it. It’s very cathartic.”

But it has also been hard to get through, filled with painful reminders that the show will soon be history. Reminders are even here in her dressing room. Colombino pointed to her makeup mirror. Only four of its bulbs were still lit, the other 14 bulbs burned out.

“They’re not replacing them,” she explained with a rueful laugh. “Because we’re done.”