In music, old is new 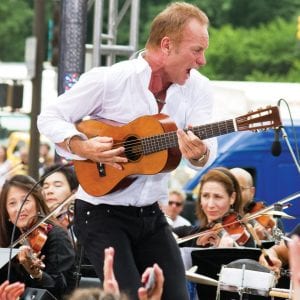 Sting performed with an orchestral backing earlier this month on CBS’s “The Early Show” in New York. (AP Photo/Charles Sykes)

At a time of transition for their industries and careers, veteran musicians are seeking out ways to make something old seem new again.

Current projects by R.E.M., Sting, Squeeze and Suzanne Vega illustrate some diff erent approaches artists are using to mine their cataloges for fresh business. All are more creative than the common begrudging approach to the past: Let the record company package some greatest hits together and add a new song or two for flavor.

Vega is in the midst of a fourvolume set of bare-bones versions of old songs, arranged thematically. Squeeze re-recorded some of their best songs so faithfully they challenge fans to, as the disc’s title says, “Spot the Difference.” Sting, who released a medievalinspired holiday album last fall and two years earlier wrapped up a Police reunion, recently released symphonic versions of old songs.

R.E.M.’s record company just released a 25th anniversary edition of the “Fables of the Reconstruction” disc, a few months after the band put out a live set featuring rarely performed renditions of songs from early in its career.

Besides the attempt to squeeze more income from old work, the projects illustrate the shared circumstance of artists who became popular some 25 or 30 years ago. They’re working artists — at a peak age of creativity for most professions — playing for audiences increasingly interested in what they did rather than what they’re doing.

Squeeze’s Chris Diff ord kicked around this topic while having a drink a few weeks ago with Neil Finn, who reformed the band Crowded House and is releasing its second album since the return.

“He didn’t want to go out on the road and play another hits package,” Diff ord said. “No artist does. You want to go out and play the things that most interest you. There are ways of doing that where you can marry the two together.”

Despite two catalog-mining releases within a year, bass player Mike Mills said R.E.M. continues to look forward. The band has split time in New Orleans and Berlin this year making a new album.

“The thrill of being in a band is writing a new song, rehearsing it with the guys and having it become something new and exciting,” he said. “At the point you’re not doing that anymore, you can either quit or become a jukebox band, a greatest hits band. There’s nothing wrong with that. It’s just never a direction in which we’ve wanted to go.”

The deluxe “Fables of the Reconstruction” reissue cleans up the sound of R.E.M.’s third album, and includes a surprisingly redundant bonus disc with versions of the songs recorded in the band’s Athens, Ga., base before the band went to London to make the disc with producer Joe Boyd.

The two-disc album from Olympia Theatre in Dublin, released last fall, is more interesting. The band took over the theater for live rehearsals before an audience, testing out songs for their upcoming “Accelerate” album. R.E.M. mixed in a lot of material from their cult favorite period in the early to mid-1980s, much of it left behind when the band started having hits.

All but 10 of the project’s 39 songs are vintage, songs like “Kohoutek,” ‘’Cuyahoga” and “So. Central Rain” that are attacked with some nervousness by musicians wondering if they would remember them.

“It’s like trying on a shirt that you haven’t worn in 20 years,” Mills said. “If it still fits, then it feels pretty good.”

Squeeze literally tried on some old clothes, along with vintage recording equipment and instruments, to get in the spirit while making its new/old disc.

Its roots were strictly business. The Universal record company controls the rights to Squeeze’s old recordings, which left Difford and partner Glenn Tilbrook feeling trapped. Marketing old Squeeze songs were low priority, yet Squeeze material was considered too valuable to give up, Diff ord explained. Their unhappiness came to a head three years ago when, on a trip to the United States, Diff ord turned on the TV and heard “Tempted” in a beer commercial. He had known nothing about it.

Squeeze wants to market its catalog for use in soundtracks and ads more aggressively, but realizes no one’s going to want a new version of “Tempted” unless it sounds almost identical to the original — complete with former band member Paul Carrack to repeat his vocal. “You’re like a forensics scientist,” Diff ord said.

“It became obvious to me that this wouldn’t work unless it was a labor of love, and that was the struggle I was having in the beginning, because we wouldn’t have chosen to go back and record stuff that we had already done,” Tilbrook said. Most of the songs are virtually identical to the originals, but they tried to improve a couple where they were dissatisfi ed with the first try. They made “Black Coffee in Bed” bouncier and gave “Some Fantastic Place” more grand.

Vega gives a more intimate reading of her old songs on her “Close Up” series, usually accompanied by her acoustic guitar, a bass and some electric guitar. The first volume, “Love Songs,” contains compositions ranging from 1985’s “Marlene on the Wall” to 2007’s “Bound.” Volume two, “People & Places,” is out in October, with “States of Being” and “Songs of Family” to follow next year.

Business was the inspiration here, too. She had no record deal, so Vega formed her own company in 2008 and decided to rerelease her catalog on her own label.

“That way I would have control over the masters of my (newly recorded) songs, collect a database for the release of a new album in 2012, as well as raise cash for that new album,” she said. “I also now have a way of earning a living for the rest of my touring life by selling merchandise at the venues.”

Can she interest fans in new versions of the old songs when they love the old ones and their discs aren’t wearing out? She noted the stripped down, relatively unproduced versions has their appeal.

“If Leonard Cohen did the same, for example, I would be interested,” she said.

Sheryl Crow is aware of the trend of artists re-recording material so they have full control over its use. It’s smart, she said, but not for her.

“I don’t know if I really want to go travel backward for that,” she said. “The money for me is not really why I’m doing it.”

Under the title “Symphonicity,” Sting is releasing versions of some old songs with an orchestral backing. He was intrigued by the sound when he was invited to give a private concert last year backed by the Chicago Symphony.

All of the projects, ultimately, are part of the feeling-out process of trying to make a living in an industry that prizes youth and is constantly in flux. Besides, Diff ord said, he found it enjoyable.

“I found it quite nourishing to go back and do some of these songs,” he said. “They’re like new songs for me.”