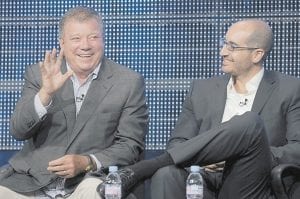 William Shatner, of all people, stands at the center of television’s latest moral battleground.

He’s the cantankerous lead character in a new CBS sitcom, “(Bleep) My Dad Says,” that is scheduled to air on Thursday nights. Rather than “bleep,” the title uses a series of symbols that suggest the expletive included in the book title on which the series is based.

The Parents Television Council last week sent letters to 340 companies that advertise frequently on TV urging them to stay away from the show unless the name is changed. The group argues that the title is indecent.

“Parents really do care about profanity when their kids are watching TV,” said PTC President Tim Winter. “All parents? No, but something like 80 or 90 percent of parents. Putting an expletive in the title of a show is crossing new territory, and we can’t allow that to happen on our watch.”

Winter’s letter to companies asks bluntly: “When you advertise on television, do you want your customers to associate your product with (bleep)?”

His letter uses the expletive, not the word “bleep.” Winter uses the real word 10 times in two pages.

But how much do parents care?

Parental concern about profane language on TV is clearly waning, according to the Rasmussen Reports pollsters. Rasmussen’s survey of 1,000 American adults taken July 27-28 found that 57 percent said there was too much inappropriate content on television and radio. Sex and violence is the main concern; only 9 percent of those polled pointed to profanity as the biggest problem area.

Top CBS entertainment executive Nina Tassler said the network really hasn’t gotten any push-back from anyone besides the PTC about the title, although the complaints have “created a lot of buzz” about the series.

Translation: Any attention is good attention, when you’re trying to sell something new.

To many people, it’s not a big deal.

Shatner is among them.

“I’ve got grandchildren. I brought up three girls. They’ve all got kids. OK? And you say, ‘Boopy-doo-doo, you’ve got to make poo-poo. Come on. Make poo-poo in the toilet.’ Eventually, poo-poo becomes (bleep). ‘Go take a (bleep), you’ll feel better.’ You say that to your kids. The word (bleep) is around us. It isn’t a terrible term. It’s a natural function. Why are we pussyfooting?”

To little notice, the Investigation Discovery network said last week it would premiere a new series — “Who the (Bleep) Did I Marry?” — on Aug. 25. The nonfi ction series follows couples in which one spouse has a shocking secret, such as being a robber or bigamist. The actual word “bleep” is used.

Network President Henry Schleiff said the title fit the series’ irreverent tone. Being a small network, Investigation Discovery needs to do things that will attract audiences, he said. “Who the (Bleep) Did I Marry?” will air at 10 p.m. ET and its target audience is women 25 to 54.

Shortly after the CBS series was announced in May, the PTC threatened to challenge the broadcast license of CBS stations that air “(Bleep) My Dad Says.” The show hasn’t aired yet, so there have been no challenges.

The council increasingly believes that advertiser boycotts are an attractive approach to seeking changes, Winter said.

He said he’s heard from a dozen or so advertisers that agree with his “(Bleep) My Dad Says” plea. All requested anonymity, he said.

Gauging the effectiveness of such campaigns is difficult. Winter cited the 2008 CBS series “Swing Town,” featuring spouse-swapping couples, where mainstream advertisers began slipping away after the council pointed out the content. The series died. But it’s almost impossible to really tell if advertisers fled because of the show’s content, because it was doing poorly in the ratings or because of other reasons.

Most prime-time commercial time is bought in blocks, where an advertiser’s products will appear within many different shows; a company would need to specifi- cally request that its ads not appear within a specific show. CBS would not discuss what its advertisers have been saying about Shatner’s series.

“We’re hoping that the egos in the corporate suite at CBS will recognize that they did make a mistake and will change the name,” Winter said. “I spent 15 years at NBC. If there’s a show that comes in with no advertisers, there would be a change. If the show comes in with advertising, then I think it’s appropriate for the public to know who’s associated with (bleep).”

In these days of video games, movies and dozens of television networks, policing language for children has become a very diffi cult prospect for parents.

“They may be unrealistic in the world we live in today,” Schleiff said.