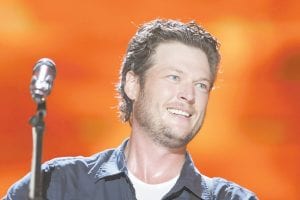 Blake Shelton has a new album out and a song in the top five of Billboard’s
country charts, yet all anyone wants to talk about is his upcoming wedding to Miranda Lambert.

He can’t blame them.

“I love talking about it,” Shelton said. “I mean, I’m proud. I get to marry Miranda Lambert. That’s awesome.”

So before we get to the goods about Shelton’s just-released second “six pak” album, “All About Tonight,” let’s linger over those wedding details.

Shelton says the plan right now is to get married next May in Texas. Lambert headed there this week with some friends and bridesmaids to scout venues.

Shelton probably doesn’t have the time anyway. He’s been as busy as ever over the last six months. The first six pak — a marketing test bubble by Warner Music Nashville that included just six songs at a lower price than most albums — was driven by the titular No. 1 hit, “Hillbilly Bone,” with Trace Adkins. The song netted the pair Academy of Country Music and CMT video awards — the first awards of Shelton’s career.

That first six pak debuted at No. 3 on the Billboard
album chart and has sold more than 230,000 copies so far, according to Nielsen SoundScan.

Shelton said he has felt a groundswell of interest over the last six months with television appearances and social media campaigns driving album sales and radio airplay.

“I’ve never had all those wheels turning at the same time,” Shelton said. “You see how once the machine gets rolling it just kind of keeps going. As long as you can stay out of your own way, things are good for a little while.”

Shelton said he’s thrilled so far with the success of the concept, but he and Warner won’t consider the experiment a complete success unless the second installment sells well, too. After watching things develop, though, he says he’s decided it really doesn’t matter how you sell your music.

“If there’s a song people like, they’re going to go buy it,” Shelton said. “If you don’t want the song, you won’t take it if it’s a quarter.”

Shelton also thinks this is probably the end of the six-pak experiment.

“I don’t see (the next album) being another six pak honestly, but it may be a fully digital project,” he said. “I don’t know. As long as people are into it, I don’t care how they sell it.”