Leonard Skinner, the basketball coach and gym teacher who inspired the name of the Southern rock band Lynyrd Skynyrd, died Monday in Florida, his daughter said. He was 77.

Skinner died in his sleep at the St. Catherine Laboure Manor in Jacksonville, where he had been living for about a year, his daughter Susie Moore said. Skinner had Alzheimer’s disease.

He was working at Robert E. Lee High School in Jacksonville in the late 1960s when he sent a group of students to the principal’s office because their hair was too long. Those students later formed a band, using a variation of Skinner’s name for their own.

During an interview in January 2009, Skinner said he was always bothered by the way the legend grew to say he was particularly tough on the band members or that he had kicked them out of school, according to The Florida
Times-Union,
which first reported Skinner’s death. 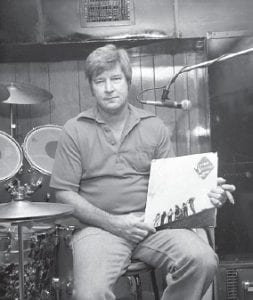 In this undated photo, Leonard Skinner holds Lynyrd Skynyrd’s album “nothin’ fancy” as he sits in The Still bar which Skinner owned. Skinner, the namesake for the famed Southern rock band Lynyrd Skynyrd, died in his sleep early Monday at the St. Catherine Laboure Manor in Jacksonville, where he had been living for about a year. He had Alzheimer’s disease. (AP Photo/ The Florida Times-Union)

“It was against the school rules,” Skinner said then. “I don’t particularly like long hair on men, but again, it wasn’t my rule.”

The band became popular in the mid-1970s, with hits such as “Sweet Home Alabama” and “Free Bird.” Three of the band members, including lead singer Ronnie Van Zant, were killed in a 1977 plane crash. The band regrouped and continues to perform today.

After discovering the connection, Skinner eventually made friends with some of the band members, according to the paper. They even performed at a Jacksonville bar the former coach owned.

Skinner later allowed the band to use a photo of his Leonard Skinner Realty sign for the inside of their third album, and he once introduced them at a Jacksonville concert.

Skinner’s children said their father was never completely comfortable with being linked to the band but did grow to embrace it.

“He made a lot of new friends,” Moore said. “That in itself really brought a lot of wonderful people in our family’s lives, simply because they were Lynyrd Skynyrd fans, and they wanted to meet Dad. They loved him. They’re part of our extended family now.”