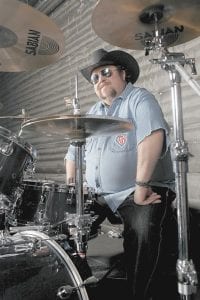 Don’t call Colt Ford a country rapper, and whatever you do, don’t call what he does on his newest album, “Chicken & Biscuits,” hip-hop.

In fact, stop trying to pigeonhole him at all. Little riles up the 300-pound Georgian more than that, and a riled up Ford might ask you to step out back.

“They have to put it in some sort of category,” Ford said over a recent breakfast of — you guessed it — fried chicken and biscuits at a cafe. “I tell them all the time: I’m a country artist. You figure it out on your own.”

While Ford certainly raps when he steps up to the mic, he feels to call him a rapper is to paint him into a corner he doesn’t want to inhabit.

“I feel like I’m kind of a bowl of jambalaya with country as the main ingredient,” he said. “There’s a little bit of everything in there. There’s some rock, there’s some southern rock, there’s some hiphop in there, some R&B. To me that’s what makes music cool, that there are no boundaries.”

Jason Brown has made smashing boundaries a priority since coming up with the Colt Ford persona in 2006 at the suggestion of his wife. The former professional golfer and collaborator with Jermaine Dupri had pretty much given up on a music career and was pursuing another line of work when Jessica said why not give it one more shot.

The performer quickly learned that Nashville’s famed Music Row wasn’t interested in what he had to off er, but he found an audience anyway. He partnered with Shannon Houchins, who he knew through his work with Dupri, and they formed the independent label Average Joe’s Entertainment. It’s a decidedly anti-Nashville outfit, which suits Ford just fine.

“The truth of the matter is people’s musical palette is a lot broader than people like to admit,” Ford said. “Find a little rural country town and see those kids driving Z71 trucks with their dip can in their pocket, and they’ve got a Jamey Johnson CD and a Lil Wayne CD in their truck.”

The 40-year-old Ford always had a gift for rap. He caught hiphop fever as the genre was developing and discovered he had a talent for stringing words together. He worked with Dupri and even cut his own album. But when it came time to drop the disc, Vanilla Ice came out and white rappers were quickly deemed very uncool.

The climate has changed since those times, in large part due to Eminem. And when he put together the Colt Ford persona, there was no question what his vocal delivery would sound like.

“Chicken & Biscuits” opened at No. 8 on the Billboard country chart in April and remained in the top 15 a month later, a strong showing for an independent release. Nielsen SoundScan shows 38,000 albums sold, pushing him over 260,000 since his 2008 debut, “Ride Through The Country.”

Darryl “DMC” McDaniels, a guest on “Ride On, Ride Out,” says Ford is earning that audience with real talent.

“I want people to understand that Colt Ford is real,” said Mc- Daniels, the co-founder of the legendary Run-DMC. “He’s better than a lot of rappers in hip-hop who shouldn’t even be on the mic, you know what I’m saying? There are rappers living in the ‘hood … I would rather listen to Colt Ford than listen to them. And that’s saying something.”

Houchins, who made his name producing acts like Bubba Sparxxx, says the real Jason Brown lives through Colt Ford, and each fan takes away something diff erent.

“He crosses such a huge age demographic,” Houchins said. “I like to say to older fans he’s the new Hank Jr., he’s just an … outlaw. But to the kids, because he’s got the hat on and the sunglasses, he’s like the new Barney. He’s a cartoon character. It’s somewhat the Mr. T appeal. He’s just a character.”