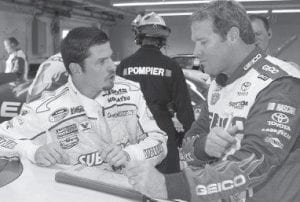 Patrick Carpentier needs to crack the top 35 to guarantee his No. 10 Gillett Evernham Motorsports team a spot on the Sprint Cup series next year, but if he is nervous about his job status it doesn’t show.

Carpentier, the easygoing Canadian, has become popular with fellow drivers and seems to smile no matter the situation. Even though he finished 20th at Watkins Glen over the weekend, he knows his next race could be his final opportunity to convince his sponsors he deserves another year. But he’s not going to treat every lap as his last.

“If you worry about it, you’ll perform worse most of the time,” he said.

The race at the Glen marked the one-year anniversary of Carpentier’s Sprint Cup debut, and he improved over last year’s 22nd place finish.

Good cars have been hard to come by this year. Carpentier failed to qualify for Daytona and didn’t finish in the top half of the field in his first 15 races, but thinks his team is turning it around. He won his first pole in New Hampshire, then finished a season-best 14th in Chicago.

Now, the two-year transition from open wheel to NASCAR’s top circuit appears to be paying off for Carpentier, who has quickly gained the respect of his fellow drivers.

His Nationwide Series results have been good, too. Carpentier has four top 10s in five starts this year and might have won in his home country if the recent Montreal race hadn’t been shortened by rain. He settled for second.

The fact he was in position to win is a testament to Carpentier’s patience, something he had in short supply early in the season.

“In Indy cars, you can attack all the time,” he said. “You still have to be smooth, but you can enter (a corner) as late as you want and just abuse the car. I think you need a little bit more finesse with a stock car than you do with an Indy car, otherwise you will just burn everything up.”

It’s a lesson Carpentier learned early in the season. Every weekend he’d find himself in a battle of wills with his car, and most of the time the car won.

“You have to let the car do what it wants,” he said. “That’s the biggest thing I’ve learned. I’m still learning. Every race that we go to, every track that I race on, I’m still learning a little bit more and more.”

Even if Gillett Evernham decides to let him go, don’t expect Carpentier to return to his open wheel roots.

“I like NASCAR,” he said. “I like the ovals and that’s what I want to do. The IRL is going away from ovals and for me, I have no interest in going back.”