Patterson gets 2nd chance with Reds 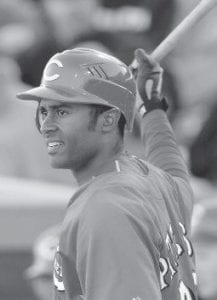 The spring games had already begun across Florida and Arizona. All Corey Patterson could do was work out on his own and wait.

Only 28 years old, the speedy center fielder found himself out of baseball at the start of March. He was working out at his home in Atlanta, looking for an offer to prolong his career in the majors.

He got the best one possible.

Manager Dusty Baker, who had watched him develop and then crash with the Chicago Cubs, wanted to bring him to the Cincinnati Reds. Baker has a hunch that Patterson is a late bloomer. He got a minor league contract on March 3 with a promise that he could compete for a job.

Patterson has been on the fast track ever since.

Once he got the rust off from his layoff, the former first-round draft pick has played himself into contention for the primary job in center field. Norris Hopper also is in the running, with Ryan Freel – who started in center last year – moving into a utility role.

With less than one week left before opening day, Patterson is batting .367.

“It’s going like I thought it would,” he said. “It takes you a good week, week and a half to get in the games and get the adrenaline flowing and get into baseball shape. No complaints.”

Baker sure likes what he sees.

“For a guy who came in late, he’s looked very good, actually,” Baker said. “He’s worked on his bunting. He’s always been a good outfielder. He’s got a good arm. He’s probably one of the fastest guys in baseball. I don’t think most people know that.”

Few know him as well as Baker.

Patterson was the third overall pick in the June 1998 draft, immediately earning the label of can’t-miss outfielder. With his speed, the Cubs envisioned him leading off the lineup for years to come.

It seemed that he was just getting started. Two years later, after he batted .215 with five steals, he was gone from the Cubs and the National League. He played two years in Baltimore, batting .276 with 45 steals in 2006 and .269 with 37 steals last year.

Then, he was back home in Atlanta, looking for someone to give him another chance.

Baker, who managed him for three years in Chicago, felt he deserved one. Baker thinks that Patterson has a chance to finally blossom in Cincinnati.

“He’s doing things we’d hoped he would have done earlier than now, but everybody doesn’t get it at the same time,” Baker said. “He was in on-thejob training in the big leagues. That’s difficult.”

When Patterson got his contract, his teammates knew this was more than just another minor league signing. Freel figured it meant an end to his chances of playing in center.

“When they go out and get Corey Patterson, you can’t help but think about what’s going on,” Freel said.

Patterson is getting the bulk of the time in center field as opening day approaches. He was in the lineup again Monday night against Toronto. Patterson knows his relationship with Baker has been a factor in getting him this chance.

“When you have a manager or a general manager who has seen you at your best in person, they really know what you can do,” Patterson said. “I think that’s a plus for anybody in that situation. I think that was a big part of it. I’m glad he’s here. He had a pretty big influence on me getting over here, so I have a lot of respect for him.”