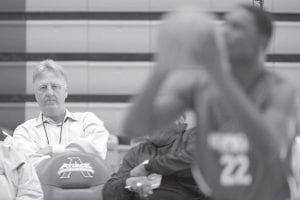 Any NBA team with questions about Patrick Patterson’s work ethic should check his academic record.

While he was a basketball star at Kentucky, Patterson was completing class work at an accelerated pace. Most players who leave school early put graduation on hold, but Patterson took just three years to get his degree in communication and leadership development.

“It was extremely hard, as far as being at a college basketball program where you’re constantly traveling,” he said. “Games, practice, the fans, all the pressure, then you’ve got 18 hours of classes.”

His work ethic shows in his game, too. Patterson didn’t have much of an outside shot until about a year ago. He improved it well enough to make 24 3-pointers last season after making none his first two years at Kentucky.

Patterson showed off that jumper earlier this week during a workout for the Indiana Pacers, making several long-range shots and demonstrating the kind of versatility now expected of NBA forwards.

He said adding the perimeter game wasn’t strictly a move to prepare for the NBA.

“Just to improve my game,” he said. “I started on it the summer going into my junior year. I came to Kentucky, and coach Cal (John Calipari) and the coaching staff put me with the wings from day one.”

Patterson’s perimeter game stood out in the part of the workout that was open to the media. He said it is important to show his versatility in person.

“A lot of teams aren’t really sure what I’m capable of,” he said. “They know I’m a four-man, I can go and post up. They’re not really as well informed with my perimeter game, my jump shots, putting the ball on the floor, and also my face-up game and my defense that’s improved.”

Patterson worked out under team president Larry Bird’s watchful eye. He said he wouldn’t mind playing for the Pacers, who are slotted 10th in the first round.

“Whatever happens, happens,” he said. “I’m hoping to go in the lottery. If I’m around at 10, I hope they’ll take me. I definitely like the city. I like it here, I like the people, I like the fans.”

His background in communication and leadership development could pay off once he’s drafted. Patterson exuded a pol- ished, cool confidence while taking questions after the workout.

“It’s just as important as your performance on the court,” he said. “When you’re not on the court, it’s all about your image, how you portray yourself to the public. It definitely prepared me for what I’m going through now.”

He also knows what it’s like to share the spotlight, experience that could help him adapt to the NBA. As a high school senior, he costarred with O.J. Mayo at Huntington High in West Virginia. This past season, as a college junior, freshman standouts John Wall, DeMarcus Cousins, Daniel Orton and Eric Bledsoe drew considerable attention.

“Luckily, I played with O.J. my senior year, so I got to share the spotlight with him,” Patterson said. “That prepared me for what I went through this year with all the star freshmen. Playing with my teammates this year definitely prepared me for the NBA, playing beside very talented people and All-Star players.”