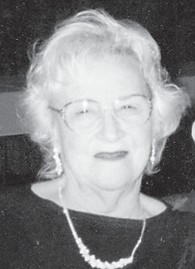 Born in Pike County to the late Benjamin Harrison and Sadie Imel Fife Hall, she was the widow of William B. Harper and was later married to Lloyd E. Elson, who also preceded her in death.

She was a sister of the late Hurbert Hall.

She was a member of the Tipp City Church of Christ, and was graduated from Fleming-Neon High School.

She was the winner of the first Mountain Heritage Golden Girl Pageant in Letcher County.