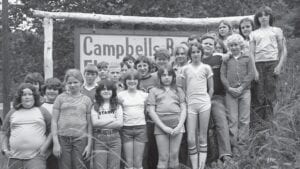 PICTURES WORTH 1,000 DREAMS — Student photographers stand outside Campbells Branch Elementary School, posing to have their own photo taken in the mid-1970s. A film about their experiences in a photography class and how it impacted their lives appears on PBS’s longest running documentary show, POV Docs, at 10 p.m. on Monday.

About 45 years ago, Wendy Ewald, then a new teacher in Letcher County, started a groundbreaking photography program with elementary school students here.

Monday, people across the country will get to share the memories of the students via a new film from Appalshop that will air on the PBS series POV Docs.

Portraits and Dreams, named for Ewald’s 1985 book of the same title and directed by Elizabeth Barrett, of Whitesburg, will be shown at 10 p.m. Labor Day on KET.

Appalshop has scheduled an in-person screening outdoors under its solar pavilion at 7:30 p.m., September 8, followed by a discussion with Barrett. Ewald’s book was republished and released August 27 by United Kingdom publisher MACK.

“Wendy came here sometime in the ‘70s, I don’t remember what grade I was in. We were issued a camera, we built a darkroom, and we took pictures,” said Sue Dixon Brashear, who when Ewald came was an elementary school student at Campbells Branch.

Brashear said there were 12 students in her eighth-grade class, and at least eight went on to earn college degrees. She always remembered Ewald, and the pride she instilled in her students

“It was just a really good program,” she said. “It was something that had never been done before.”

Brashear, who grew up on Turkey Creek but now lives at Viper in Perry County, is one of seven of Ewald’s former students who are featured in the film. Students featured are:

• Brashear, who graduated from Alice Lloyd College with a degree in physical education, became an elementary school teacher who made photographic books with her students, and recently retired as a principal in Perry County;

• Russell and Kim Akemon, siblings who were reared by their grandmother and made taking pictures an everyday part of their lives. Russell had a successful career at the Kentucky Power Company and Kim leads a youth ministry group and is an avid amateur photographer;

• Gary Crase, who was the smartest student in his class, grew up in a house without running water. Despite progressive hearing loss, upon graduating from high school Gary was awarded a full scholarship to Alice Lloyd College and transferred to Morehead College where he got a degree in industrial technology. He is a lab and instrument technician at Centre College in Danville, and serves on the Board of the Kentucky Association of the Deaf;

• Delbert Shepherd, who was raised in a musical family, worked in the North Carolina mines. He returned to Kentucky and is now a carpenter and performs with a traditional bluegrass band, singing and playing stand-up bass;

• Robert Dean Smith enjoyed writing as a child, but a learning disability caused him to write phonetically, without spaces between his words. Frustrated, he dropped out of school and went to work in the mines. He married and reared two children, but when he lost his coal mining job, he turned to foraging and photography, and struggles to support his family;

• Denise Dixon Benge took pictures of herself and her brothers as a child. A gifted artist, she is a professional photographer and videographer and in 2014 along with her mentor Wendy, curated an exhibition of her childhood photographs and recent work for The People’s Biennial at the Museum of Contemporary Art in Detroit.

Brashear said she watched the movie at a premier along with other students.

“I bawled all the way through,” she said.

The title Portraits and Dreams refers to photo assignments given to the students. In one assignment, students were asked to take a photograph that illustrated a dream they had. They produced a series of dramatic, sometimes frightening, photos from their dreams and nightmares.

Since selfie-sticks weren’t a fad in the mid-1970s, Brashear said she had to bribe her brother to take that picture for her.

Some people then and now fear the photographs exploit the poverty of the area, but Brashear said she still doesn’t see it like that even as an adult.

“Of course we were all poor, but we didn’t realize that,” she said.