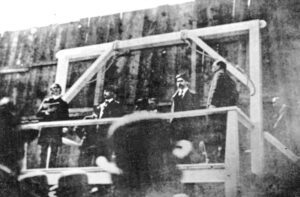 The Cincinnati Enquirer carried this photo of Scott Jackson (near left) and Alonzo Walling (near right) on the platform beneath the gallows a few minutes before they were hanged on March 20, 1897.

The bartender at Legner’s Tavern testified that Scott Jackson left the valise at the tavern on the night of the murder and picked it up the following night. He recalled that it felt heavy enough to be holding a bowling ball.

After picking up the leather grip at the tavern, Jackson walked to the middle of the Covington Suspension Bridge and dumped Pearl’s head and his dissecting knife into the Ohio River.

He didn’t want to return the grip to Legner’s as he was too well known there. He stopped instead at another tavern where he wasn’t known. Mr. Kugel, the owner, told Jackson he could leave it with him. He did but never returned to get it. He probably never planned to retrieve it.

After reading about the case in the newspapers, Kugel suspected the valise could be important and took it to authorities. The leather luggage item was brought in as evidence in the trial and the prosecutors inferred that it was Pearl Bryan’s blood that was found therein, and the jury likely assumed it was. This was before different blood types could be determined, which has proven to be a valuable asset in medicine and in law enforcement.

The defense insisted the murder was committed in Ohio, not in Kentucky. This was a serious contention as a dismissal of charges in Kentucky and moving the case to Ohio would delay the trial further if the argument was accepted.

A man giving his name as William Trusty took the stand for the defense claiming he had driven the carriage on the night of Pearl’s death and that she was dead when she boarded the horse-drawn vehicle. Trusty was told an abortion had been tried but it had failed resulting in her death. He left the area following his testimony and was never seen again. Neither the jury nor others at the trial believed his testimony as it didn’t correlate with other evidence and testimony. Pearl was seen getting into the conveyance while she was alive.

Scott Jackson took the stand when the defense began its case. He claimed it was Alonzo Walling who murdered Pearl. After delving into various aspects of the case from Greencastle, Indiana to Cincinnati, Ohio and finally Fort Thomas, Kentucky the jury was asked for their verdict, and it was answered with a resounding “guilty.”

Jackson and Walling were best friends before their capture but afterwards the two bad boys became worst enemies. Alonzo Walling went on trial for the murder of Pearl Bryan on May 20, 1896.

“One night a bunch of us dental students were drinking at Wallingford’s Tavern and Scott asked the group what poison would be the quickest in killing someone,” Walling explained to detectives. “The students mentioned hydrocyanic acid, prussic acid or a large dose of cocaine. He chose cocaine because he could buy it legally without a prescription and it could be purchased just around the corner at Koeble’s.”

Walling said that he knew Scott Jackson murdered Pearl and that he wasn’t a party to the murder. The jury wanted further proof.

“ Scott had Pearl ’s head wrapped in his coat on the night of the murder,” Walling told them. “His coat became bloody and he had me ditch it for him. I can tell you where you can find it. It’s in the sewer at the corner of John and Richmond Street, wrapped in newspapers.”

Detective Witte was sent to the location and he soon found a bluish black men’s jacket wrapped in newspapers. It matched the slacks Jackson was wearing when he was arrested. The jacket and items found with it proved to be a wealth of information for the police. It had blood stains that were primarily on the sleeves. There were also blood stains that could be consistent with being wrapped around a human head. They pulled something from the pocket and found it to be three ladies handkerchiefs wadded together.

Authorities also found part of a herb called tansy flower which was used in producing miscarriages. The handkerchiefs were shown to Pearl’s family members after they were cleaned. Her mother and sister were certain they belonged to Pearl. Another group of ladies clothing items, tied together with a piece of railroad iron, was also found nearby. They were Pearl’s as well.

Walling also led them to other items he and Jackson had secretly discarded and told detectives they could find more in lockers at the dental school. Jackson was livid. He had trusted Walling fully and Walling proceeded to tell all he knew. Turnabout is fair play as they say, and Scott Jackson would do whatever he could to see that Walling would also hang.

Walling had gone along for the ride and the guilty ruling against Jackson was a foregone conclusion. Both men were active in the murder, in the actions afterwards, and were sentenced to hang.

Their lawyers argued that Pearl died from the cocaine administered to her in Ohio. “They aren’t guilty of the murder in Kentucky since Pearl died in Ohio.” Yet they couldn’t be tried in Ohio as that would be tantamount to double jeopardy. The justices noted that the coroner’s inquest stated that Pearl was alive when she was brought to the orchard in Kentucky.

The dual hanging was set for May 20, 1897. With court proceedings behind them, talk returned to lynching. The two convicted men were now bent on escaping.

There was a massive jailbreak from the Campbell County Jail during their wait for the hangman’s noose. Many escaped and Jackson and Walling might have taken the opportunity to slip away but they decided they were better protected while in jail. Could this jailbreak be a guise for some clandestine group to get an opportunity to lynch them? Jackson and Walling felt it was a legitimate concern and when order was restored the two most famous inmates at the time were still safely in their cells behaving like Sunday choir boys.

On the morning set for their hangings Scott Jackson asked to speak to a minister. After the meeting he spoke with Sheriff Plummer.

“Sheriff, I’ve said all along that it was Alonzo that murdered Pearl. It’s been bothering me, and I must tell you that Alonzo Walling didn’t do it. I have to take that back.” Jackson said.

The sheriff announced the hanging would be delayed momentarily while he notified Kentucky Governor William O. Bradley of the development. He sent a telegraph to Governor Bradley in Frankfort to apprise him of the situation.

“Sheriff Plummer, I’ll agree to commute Walling’s sentence if Mr. Jackson confesses to the crime and tells us where to find Pearl Bryan’s head,” the governor responded.

The sheriff relayed this to Jackson and said he would have to have his answer soon. After a few minutes Jackson said he had nothing more to say.

Sheriff Plummer asked that the gallows be rechecked and soon thereafter Jackson and Walling were brought to the scaffold, which was inside the Campbell County Jail. When the nooses were placed around their necks both seemed to have lost their bravado.

Jackson was asked if he had any final words to say. He seemed to be in thought and finally Walling looked toward him hoping he would say the words that could save his life.

“I have only one thing to say,” Jackson finally said. “I am not guilty of this crime, and I am about to pay the penalty for it with my life.”

“I can only say you are taking the life of an innocent person,” Walling answered when he was questioned. “I call on God to be my witness to what I say is the truth.”

Sheriff Plummer sprung the trapdoors simultaneously sending both Scott Jackson and Alonzo Walling to meet their Maker and their destination in eternity. They paid the price for Pearl Bryan’s death, but it wasn’t enough. It wasn’t enough … because Pearl Bryan didn’t deserve it!

Jadon Gibson is a freelance writer from Harrogate, Tennessee. His stories are both historical and nostalgic in nature. He wishes to thank the Museum of Appalachia, Lincoln Memorial University, and Alice Lloyd College for their assistance.