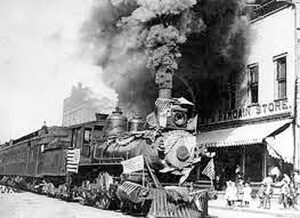 Sheriff Plummer had a Pullman Sleeper, but he didn’t sleep much as he traveled by train to Greencastle, Indiana in search for clues to the Pearl Bryan murder.

Sheriff Jake Plummer of Campbell County, Kentucky had a busy morning on Saturday, February 1, 1896. A young lady had been found brutally murdered in his jurisdiction, near an orchard just outside of Fort Thomas. Detectives Crim and McDermott, investigators from Cincinnati, showed up to assist and began scouring over the crime scene for clues.

News of the horrific murder traveled quickly and gawkers soon began arriving and entering the area before the Covington officers expelled the curiosity seekers and went on searching for other clues. They then joined the other officers searching for the head of the deceased, as she had been decapitated. It would not be found.

Soon the sheriff ’s deputies closed down the traffic past the crime scene area and admitted only emergency personnel. Smaller police departments such as Sheriff Plummer’s didn’t have the resources to handle major cases in that era. In situations such as this it wasn’t uncommon for larger units to help. Sheriff Plummer needed help and was relieved when they arrived.

After the coroner was satisfied with his preliminary investigation, he asked the sheriff to send for a wagon to take the body of the deceased to White’s Mortuary in nearby Newport. He didn’t have any idea of the victim’s identity.

A small crowd of citizens was already present when the wagon arrived with Coroner Tingley and the body at the funeral home. Newport police officers soon began showing up with loved ones who had missing daughters. They knew the process and hoped they wouldn’t be able to identify their loved one by some uniqueness about them. No one could perform the task, made more difficult in that the head of the victim was missing. Meanwhile Sheriff Plummer was sifting through missing person reports.

Two days later, on Monday, Coroner Tingley gathered with a team consisting of Carothers, Pythian and doctors Fishbach, Jenkins and Schofield, to conduct the autopsy. The clothing was removed and bagged for the sheriff’s examination. The clothing showed normal wear, but the shoes were found to be new. They had been stamped with a serial number of sorts.

The young lady had not been raped as Coroner Tingley suspected after his cursory exam at the crime scene. Ligature marks on her neck seemed to have been caused by human hands. Her neck was cut cleanly by a very sharp instrument while her fingers were nearly severed by the effort she made to try to save her life. There was a small wart on a finger of her right hand, and three toes of her right foot were fused together. These could possibly help in her identification.

Upon dissecting the body they found she was about five months pregnant and they determined it would have been her first child. They removed the fetus for later examination. Her stomach was sent to the Medical College of Ohio after removal to check its contents. Her age was estimated between 19 and 22.

Following the post-mortem, Carothers told the sheriff that the shoes she was wearing were relatively new and could possibly be traced to the manufacturer. He gave Carothers permission to take the shoes to L. D. Poock, a local shoe merchant.

“I’m not aware of the different manufacturers but I know a lot of folks in the shoe business,” Mr. Poock told the sheriff. “I believe I can find someone who can help you with this.” He received authorization to find out what he could.

“They look very much like shoes manufactured by Drew, Selby and Company in Portsmouth, Ohio,” he was told.

East-west trains ran regularly between the cities and beyond. Soon L. D. Poock was rumbling along the tracks toward Portsmouth.

“ Yes indeed, those are our shoes,” the manager of the Drew, Selby and Company affirmed upon Poock’s arrival. “They are one of our most popular brands, especially with the young ladies. The code on this shoe, 22-11, is the number of the size three shoe form that was used in the manufacturing process.”

Upon checking on that order, it was learned the pair of shoes was one of 12 pairs made for Louis and Hays Department Store in Greencastle, Indiana. Mr. Poock telegraphed Sheriff Plummer back in Newport of his findings and was soon leaving from the Portsmouth, Ohio train station, destined for home.

The sheriff was tired, getting practically no sleep since the body was discovered early Saturday morning. The telegram gave him renewed energy. He called the train station to learn the expected arrival time of Poock and for the next departure to Greencastle. He planned to meet Mr. Poock to retrieve the shoes upon his return and then leave as soon as possible for Greencastle. He followed that up with calls to Cincinnati detectives Crim and McDermott. He was pleased to learn they would accompany him to the Indiana town as they may have to do a lot of legwork finding the buyers of the shoes.

Sheriff Plummer didn’t know who the victim was or what she looked like, but he knew more than before. Later that evening he met with the detectives and boarded the train for Greencastle. After exchanging information with the other officers, he retired to a Pullman sleeper car. They would be at the Louis and Hays Department Store in Greencastle the next morning. He knew he needed rest.

Sheriff Plummer felt strange traveling overland by train in the Pullman sleeper, tracking down leads to an inane murder back on his home turf.

When the sheriff entered law enforcement, he didn’t know it would often be like working a jigsaw puzzle, hardest at first but getting a little easier with the connection of each piece. He hated rape-murder cases. He couldn’t wait to get some of the pieces put together.

They arrived at the Louis and Hays store soon after the doors were opened for business the following morning. The salesmen readily recognized the shoes just as though they were part of the family. Sheriff Plummer finally had the first two pieces put together. That gave him new hope.

This thrilling series continues next week. Its author, Jadon Gibson, is a freelance writer from Harrogate, Tennessee. His stories are both historic and nostalgic in nature. Gibson wishes to thank Lincoln Memorial University, the Museum of Appalachia, and Alice Lloyd College, from where he graduated, for their assistance.