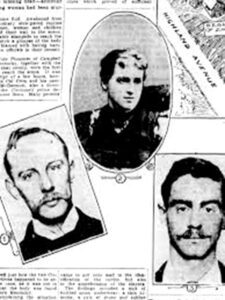 Scott Jackson felt suspicious of the way other prisoners glared at him the first evening after being incarcerated in the Hamilton County Jail in Cincinnati. Area citizens were up in arms at the way Jackson slaughtered and beheaded Pearl Bryan and this feeling spilt over to the jail population.

On the night of her demise Pearl could tell they were in a very remote area. She immediately realized that Scott’s plan wasn’t really for an abortion but to kill her. She bolted, trying to get away.

Back at the road, the taxi driver’s premonition was being realized. He knew things weren’t right and didn’t want to have anything to do with it. Believing that his life could be in danger, he immediately fled from the scene.

Meanwhile, Scott caught Pearl and attempted to force her deeper into the orchard. She continued to resist. Scott hadn’t planned on dealing with any resistance. He pulled his knife and proceeded to attack the diminutive Pearl who grabbed the blade in defense, cutting her fingers. When she jerked her hand loose Pearl grabbed his arm to keep him from stabbing her with the knife. When he pulled his arm away, two of her fingernails scratched deeply into his arm and tore a sleeve from his shirt. It made him drop his knife.

As Scott sought to find the knife in the darkness Pearl began crawling away but Scott found his knife and caught up with her. He pulled her head back by her hair and committed his ominous deed. He then wrapped her head in his coat before removing her bodice, corset and undergarments, perhaps to make the crime seem like a rape. Others suspected he was looking for an incriminating letter she may have concealed on her person. Before leaving the scene, Scott threw Pearl’s skirt up over her torso, picked up her head wrapped in his coat, and walked out of the orchard.

When they returned to the taxi the driver was absent, nowhere in sight or earshot. Alonzo led the horse-team taxi back to Cincinnati with Scott in the riding compartment, wiping the blood off with his handkerchief. Once finished he threw it and Pearl’s hat, which was still in the taxi, out the window onto the side of the road.

It was after three 3 a.m. when they arrived back at their boarding house. Scott put Pearl’s head and his knife into one of her pieces of luggage she had left with him in anticipation of being incapacitated for a period of time. At Scott’s direction Alonzo got rid of the pieces of luggage in sewers around Cincinnati except for the valise carrying the head.

“We are all in trouble,” Scott wrote in a letter to Will Wood, Pearl’s cousin back in Greencastle, Indiana, the following day. “I made a mistake. Don’t say nothing to nobody about this. Stand by your old friend and I’ll do the same for you sometime. Go ahead and burn this letter after reading it.”

Scott took the muddy, bloodstained clothing he wore the previous evening to the dental college he attended in Cincinnati and put it in his locker. Next, he took the valise with Pearl’s head inside Legner’s Tavern and asked that they hold it for him.

“Whatcha got in here … a bowling bowl,” the bartender asked after picking it up. “Yes,” Scott answered with a laugh. “Hey, you got it right on your first try.”

He stopped by the following evening to retrieve it and then walked down Elm Street and onto the Covington Suspension Bridge. Upon reaching the center of the bridge with no one around, he dumped Pearl’s head out. It fell into the cold, muddy Ohio River never to be seen again. As he walked back up Elm Street he went into a tavern where he was unknown and left the empty valise, asking the bartender to hold it for him. Scott never returned for it.

Scott Jackson and Alonzo Walling attended their classes and went about their normal activities for the next several days. During the morning hours of February 5, 1896, Cincinnati Police Chief Deitsch received a telegram from his men in Greencastle with the results of their investigation. After reading it he ordered three of his detectives to find and arrest Scott.

On his first night in the Hamilton County Jail, Scott must have felt like a lamb amidst a den of wolves … much like the innocent Pearl Bryan must have felt when she was viciously attacked and killed. He asked if the jailer or guard would sit next to his cell. It would help him feel more comfortable.

The jailer moved a chair next to the bars of his cell, sat down and resumed working on his paperwork. Soon the prisoner began chatting and became quite talkative. At first it was unimportant but then the small talk led to a question that surprised the jailer.

“Has Alonzo Walling been arrested yet,” he asked. The jailer couldn’t believe it. He stayed put and continued chatting with the prisoner in case he said more. When Scott went to sleep the jailer left to call Police Chief Dietsch and tell him that Scott asked if Alonzo had been arrested. Walling’s name had come up earlier in the case and Chief Deitsch knew it was important. He immediately sent three men out to arrest Walling. It was one of those occasions in law enforcement when everything goes right.

They learned about Walling at an early morning hour and readily found and arrested him. Alonzo was in a cell before 3 a.m., but his cell was far away from Scott’s.

Will Wood, Pearl Bryan’s longtime friend and cousin, was a wealth of information to the police after he was arrested in South Bend, Indiana where he was in medical school. Will gave full disclosure of his participation in the whole affair leading to his cousin’s death.

Scott wrote Wood instructions to destroy incriminating letters he had written. Wood had burned the letters but told Chief Deitsch what they said. After interrogating Scott, Alonzo and Will Wood the investigative team had a better idea of what happened but still had to nail down supporting evidence.

Cincinnati Mayor John A. Caldwell wrote the postmaster in South Bend, Indiana, requesting that he forward to him any mail addressed to William Wood. Almost immediately a letter from Scott to Will arrived. In the message Scott instructed Wood to “write a letter to Pearl’s mother as though it is from Pearl, saying she is tired of living at home and has found a job in another town.” Scott was still doing what he could to influence the situation.

Residents near Cincinnati were talking about the murder. A saloon owner at the corner of Ninth Street and Central Avenue in the city recalled an odd event that happened near the time of Pearl’s murder. Someone with a physical description similar to Scott Jackson came in and left a valise. He said he would come back for it but never did. Mr. Kugel, the bar-owner went into his office, retrieved the bag, and took it to City Hall where he turned it over to one of the detectives.

Scott Jackson stuck to his claim of innocence even after hearing the evidence against him. When the detective entered with the valise, however, Scott’s eyes immediately focused on it.

“Mr. Jackson is this the piece of luggage that held the young lady’s head,” he was asked. “It probably is but I wasn’t the one carrying it,” Scott answered.

Cincinnati Police Chief Deitsch stepped out of the room momentarily and soon returned with Mr. Kugel. It was like Scott Jackson had seen a ghost.

l Jadon Gibson is a freelance writer from Harrogate, Tennessee. Past copies of this series can be purchased at The Mountain Eagle office in Whitesburg. Gibson wishes to thank Lincoln Memorial University, Alice Lloyd College and the Museum of Appalachia for their assistance.