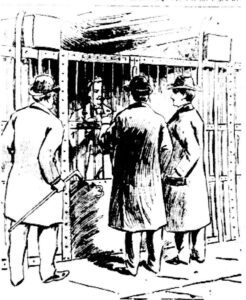 This drawing depicts accused murderer Scott Jackson being interviewed by authorities at the Hamilton County Jail in Cincinnati about a murder Jackson allegedly committed in Kentucky.

When Scott Jackson was being interrogated about the vicious murder of Pearl Bryan in rural Fort Thomas, Kentucky he was adamant in claiming his innocence. When the detective entered with the valise, Jackson’s eyes immediately focused on it.

“Mr. Jackson is this the piece of luggage that held the young lady’s head,” the detective asked. “It probably is but I wasn’t the one carrying it,” Scott answered.

Cincinnati Police Chief Deitsch stepped out of the room momentarily and soon returned with Mr. Kugel. It was like Scott had seen a ghost.

“Is this the man who brought the valise into your tavern and asked that you hold it for him,” the chief asked Kugel. “Yes sir, it is,” Mr. Kugel answered assuredly. Jackson slumped down in his seat.

An inquest was held in Newport since Pearl Bryan’s body was found in Kentucky. Sheriff Plummer and detectives Crim and McDermott first explained how they were able to identity the victim. They determined the place of death as being in Kentucky by the large amount of blood loss. She had still been alive when she arrived at the orchard where she was killed and decapitated. Blood droplets were found clinging to the bottom of leaves near the crime scene and a puddle of blood was just below the body.

The cause of death was having her throat cut although her head was also severed. The head was not found in the area. It was likely discarded elsewhere in order to prevent the identification of the victim.

Sheriff Plummer completed extradition papers to have the prisoners moved to Kentucky for their trial. Word was rampant that a large faction of citizens planned to hang the prisoners once they were transported into Kentucky. Jackson and Walling felt more secure in Cincinnati, so they hired a legal firm to fight their extradition. The papers were delivered to Ohio Governor Asa Bushnell, but the legal battle continued for three weeks before the papers were approved and signed.

Ohio and Kentucky officials were concerned about moving the prisoners because of the threats that were made against them. Sheriff Plummer felt it best to move them immediately and not give any hostile individuals an opportunity to formulate a plan. He had the prisoners taken out the back entrance of the Hamilton County Jail and into a waiting, enclosed horse-driven wagon. Meanwhile another similar vehicle waited in the front as a decoy.

The prisoners were transported across the Ohio River into Kentucky in a gallop before local residents knew they were coming. Sheriff Plummer assigned extra officers for protection as the excitement of the murder case was descending on his jurisdiction.

Scott Jackson and Alonzo Walling turned on each other as more evidence surfaced against them. They were both trying to save their own skin. The detectives were able to piece the case together and were sure the two were in it together. The detectives learned that Pearl’s head was thrown into the Ohio River although Louis Ross and Sam Phister, students at the Ohio Dental College, said it was commonly felt at the school that her head was thrown into one of the large furnaces at the school.

Twenty-eight year old Scott Jackson went on trial April 21, 1896 for the murder of Pearl Bryan of Greencastle, Indiana. Alonzo Walling’s trial would not begin until the following month.

Sheriff Plummer, sheriff of Campbell County, Kentucky and the detectives on the case were questioned about their investigation and about much of the evidence. Employees at the John Church Music Publishing Company, located at Fourth and Elm Streets in Cincinnati, testified they heard an intense argument in front of their store shortly before Pearl’s death. An open window allowed them to hear the whole heated conversation when Pearl complained that Jackson had not helped her as promised. She said if something wasn’t done soon, she was going back to Indiana and would tell the whole story to authorities. The participants were later identified as Jackson and Walling. They were able to identify Pearl Bryan by her only picture.

Investigating officers were very interested in a dissecting knife that

Scott Jackson usually carried and often exhibited in front of friends and acquaintances. They were asked if they had seen the knife since the gruesome murder. Absolutely no one had seen it since Pearl’s macabre murder and decapitation.

The porter at Legner’s Tavern and eatery testified that he saw Jackson, Walling and Pearl in the tavern early on the night the murder occurred.

“I saw one of the men put something in the young lady’s drink,” he affirmed. Through the investigation it was learned that Scott purchased the cocaine at a drug store in the immediate vicinity. In that era cocaine and many other drugs could be purchased without a prescription.

A black coachman whose stable was nearby on Peebles Corner followed on the witness stand. He stated that “the young lady was either sick, drugged or both,” on the night he took the three into Kentucky. The elderly man said, “the young lady moaned most all the way,” but added that her cries became louder and more often as they neared their destination.

“They said to wait but when she started yelling, I became so concerned with those young men I left,” he testified. “There was nothing I could do and there was no one to tell. I just wanted to get away. I was afraid my life was in danger. I left the carriage and started walking. I didn’t see anyone. I just wanted to get back to Cincinnati.”