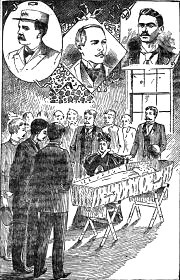 Sheriff Jake Plummer felt strange, traveling overland by train, tracking down leads to an inane murder back on his home turf. Upon arriving in Greencastle, Indiana he and the two Cincinnati detectives Crim and McDermott set out for the Louis and Hays Department Store, hoping to solve another piece of their puzzle.

They arrived not long after the doors were opened for business and the salesmen readily recognized the shoes.

“Oh yes, those are our shoes, part of a special order we got from Drew, Selby Company,” the store manager iterated as he retrieved the store’s books. “We’ve sold nine pair of that order thus far… yes here’s the other three pairs.” The sheriff could immediately see the similarity with the shoes he brought from Fort Thomas.

“Do you have a method for telling who purchased those shoes?” the sheriff asked.

“We have information that you may find helpful,” the store official replied. “Young ladies in this age group do have a greater tendency to move or change jobs however.”

Soon Sheriff Plummer, Crim and McDermott set out with three names each. They planned a lunch meeting and, despite McDermott being late, they met, had lunch and compared notes at about 1 pm. Crim found all three of the ladies he sought, all were alive and well. Sheriff Plummer found information on two on his list. McDermott found one on his list right away. After a diligent search, he finally found one other, alive and well. The men had accounted for ten pairs of the dozen pair, two of which remained at the store in Greencastle. ‘

The sheriff was disappointed that two ladies who bought shoes had not been accounted for. One pair of them was worn by the young lady who was found dead on February 1 not far from Fort Thomas in northern Kentucky.

The sheriff had brought other items of clothing and a pair of gloves that the dead woman was wearing at the murder scene. The lawmen then methodically took these items to every dry goods merchant in Greencastle. Not one worker recognized even one solitary item. The lack of success made the men lethargic but that would soon change.

Word of the horrific crime back in Fort Thomas, Ky., was gaining more impetus each day and news of the sheriff and two Cincinnati detectives investigating the murder in Greencastle had the citizenry talking. Fred Bryan was especially concerned. His youngest sister had gone to Indianapolis to visit friends nine days before and he expected her to return by now or at least to hear from her. He went to Western Union and telegraphed his concern.

“Pearl has not been here,” they quickly answered their wire. “We didn’t know she was supposed to be here. We’re all so concerned for her.”

The news had Sheriff Plummer and detectives Crim and McDermott at full alert almost immediately. They then started to dismiss the telegraph operator.

“Gentlemen, I need to tell you something more about this,” Andrew Early said. “I am a good friend of Pearl Bryan’s cousin, William Wood. Two weeks ago, he told me that Pearl had been in a relationship with a man named Scott Jackson, a dental student in Cincinnati. She didn’t go to Indianapolis. She went to Cincinnati to see Scott Jackson.

Sheriff Plummer was excited with the new information. The darkness seemed to be turning to light. Despite the lateness of the hour the officers went to the home of Mr. Spivey, the manager of Louis and Hays Department Store. They wanted to know if Pearl Bryan had purchased one of the seven pairs of black cloth, button-top shoes. Spivey knew it was important to an important murder case so he accompanied them back to his store where he reopened the books.

“Yes, she bought the pair of size three shoes,” he asserted. Finally, Sheriff Plummer learned the identity of the victim. It was Pearl Bryan.

Sheriff Plummer and detectives Crim and McDermott felt they were “on a roll” and went to the Bryan home outside of Greencastle, Indiana, despite the lateness of the hour. It must have been between two and three o’clock, yet after a moderate delay they were welcomed in and taken into “a sitting room.” The arrival of the three officers at such a late hour made them feel the news may be bad.

The sheriff had a small carrying case with the clothing that Pearl Bryan was wearing the night of her murder. He opened it and removed the skirt.

“Oh no, oh my poor darling Pearl,” her mother exclaimed immediately upon seeing it in the pale lantern light. She then cried. Sheriff Plummer felt he had best present the items, one after another, and Pearl’s sister readily said something about each item as she identified them as being her sister’s. The mother offered that Pearl may have given the items to another girl who then was unfortunately killed.

When the sheriff showed the two hairpins the mother cried convulsively. They had been the sister’s before she passed them on to Pearl. She knew her daughter was gone. The sheriff described the wart on her finger and the fused toes. There was no doubt. Their darling Pearl was gone.

Plummer hated to be the bearer of bad tidings, but he was relieved that he knew the name of the victim and possibly that of her assailant. It was extremely late when the lawmen returned to their hotel. The last thing the sheriff did was to send a telegram to Phillip Deitsch, Cincinnati Chief of Police. In it he identified the dead victim as Pearl Bryan of Greencastle, Indiana, and requested that his men arrest Scott Jackson, a student at Dental College of Ohio and hold him for questioning. Likewise, he told Chief Deitsch if he could locate William Wood to arrest and hold him for questioning.

l Jadon Gibson is a freelance writer from Harrogate, Tennessee. His writings are both historic and nostalgic in nature. He wishes to thank Lincoln Memorial University, Alice Lloyd College and the Museum of Appalachia for their assistance.