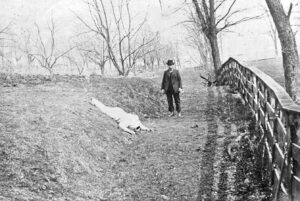 This reenactment photo shows where the young woman’s body was found in northern Kentucky in February 1896.

The location of Colonel John Lock’s farm was in the country outside of Fort Thomas in northern Kentucky. The sun was just beginning to rise on February 1, 1896, when young James Hewling noticed something lying beside the old wagon road.

He looked closer and determined it was a woman. She didn’t look right. The 16-year-old Hewling said later he didn’t think much about it at first.

“It’s sorta an isolated area near Fort Thomas and it wasn’t unusual for women to come out there with soldiers from the fort,” he said later. “I didn’t know if she was asleep or just drunk.”

He didn’t want to pry but felt obligated to tell Colonel Lock that he had seen what seemed to be a woman lying strangely beside his barn road. Lock contacted Sheriff Jake Plummer who sent a deputy out to the farm to investigate. The county coroner happened to be in the area and accompanied the deputy.

Upon their arrival the men noticed the woman was still there just as they were told. As Coroner Tingley approached her he noticed a man’s torn shirtsleeve on the ground. Upon picking it up he saw there was blood and suspected the woman may be injured. As they neared the body of the young lady, they found her lying face down on the slope of a hill with the feet on the higher side. She was dead.

She was wearing a blue and white checked skirt, white blouse, blue stockings and black buttontop shoes. Her skirt was thrown up and covered the top portion of her body and one arm was pinned under her body. When the coroner lifted it, he saw that four fingers were nearly severed. He turned the body over and pulled her skirt down, worried that it may be someone he knew. He quickly learned that would have to wait. Her head was completely severed and nowhere in sight.

Coroner Tingley sent the deputy to town to get Sheriff Plummer. He stayed to continue his investigation. The woman’s blouse and corset had been torn away. Her undergarments were also ripped from her and had bloody fingerprints on them. He noticed blood and mud on the knees of the lady’s skirt. A corset lay above the body on the hillside, white and clean except for a bloody spot, made by the bloody hand that tossed it there.

Tingley then noticed a clot of blood at her neck and blood droplets on the bottoms of the leaves above and on other nearby vegetation. Two tortoise shell hairpins and one metallic one lay nearby. The coroner felt his stomach becoming queasy and walked several feet away to await the sheriff’s return.

He was surprised on how quickly the sheriff and deputy arrived. They began investigating the scene and noticed a pool of blood up the hill, not far from the lady’s feet. Several blonde hairs were found nearby. Three sets of footprints were evident, two sets appeared to show individuals walking together peacefully while the other set of footprints indicated that person stayed near the road. Sheriff Plummer found signs of a struggle and drag marks down to where the body was found. A diligent search was made but they couldn’t find the lady’s head.

The sheriff noticed several curious onlookers had gathered at the scene. Some gawked at the body while some others were plucking leaves, with drips of blood on them, from nearby bushes. It made him uneasy. He asked the coroner if he was nearly through with his work.

“I’ve done all I can do here Jake,” he answered. “We’ll learn a lot more when we do a full autopsy. We should have the body taken to Newport (Ky.).”

Sheriff Plummer sent a deputy to arrange for a wagon to come and transport the body. About that time officers arrived from Covington, Ky., along with two detectives from Cincinnati, Ohio, to offer their assistance. These Ohio River cities are located beside and across from Newport.

The Covington officers went to work expelling the curious, nonessential, visitors from the crime scene. The crime investigators from Cincinnati went about looking over the area for any unfound clues. The smaller towns didn’t have the resources to handle major cases in that era and it was common for other units to assist.

The sheriff was pleased to have their assistance. He didn’t know “who done it” nor did he know the identity of the victim.

Old-time police work begins in Part Two of this story, which will appear next week. Jadon Gibson is a freelance writer from Harrogate, Tennessee. He thanks Lincoln Memorial University, Alice Lloyd College and the Museum of Appalachia for their assistance.