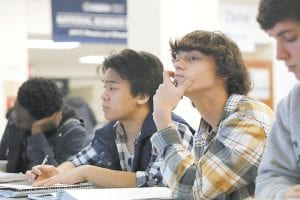 Students listened during their Advanced Placement (AP) Physics class at Woodrow Wilson High School in Washington, D.C. A new policy from the American Academy of Pediatrics recommends delaying classes for all teens until at least 8:30 a.m. to curb their widespread lack of sleep, which has been linked with poor health, bad grades, car crashes and other problems. The policy was published online this week in Pediatrics. (AP Photo)

Pediatricians have a new prescription for schools: later start times for teens.

Delaying the start of the school day until at least 8:30 a.m. would help curb their lack of sleep, which has been linked with poor health, bad grades, car crashes and other problems, the American Academy of Pediatrics says in a new policy.

The influential group says teens are especially at risk; for them, “chronic sleep loss has increasingly become the norm.”

Studies have found that most U.S. students in middle school and high school don’t get the recommended amount of sleep — 8-1/2 to 9-1/2 hours on school nights; and that most high school seniors get an average of less than seven hours.

More than 40 percent of the nation’s public high schools start classes before 8 a.m., according to government data cited in the policy. And even when the buzzer rings at 8 a.m., school bus pickup times typically mean kids have to get up before dawn if they want that ride.

“The issue is really cost,” said Kristen Amundson, executive director of the Na- tional Association of State Boards of Education.

School buses often make multiple runs each morning for older and younger students. Adding bus drivers and rerouting buses is one of the biggest financial obstacles to later start times, Amundson said. The roughly 80 school districts that have adopted later times tend to be smaller, she said.

After-school sports are another often-cited obstacle because a later dismissal delays practices and games. The shift may also cut into time for homework and after-school jobs, Amundson said.

The policy, aimed at middle schools and high schools, was published online this week in the journal Pediatrics.

Evidence on potential dangers for teens who get too little sleep is “extremely compelling” and includes depression, suicidal thoughts, obesity, poor performance in school and on standardized tests and car accidents from drowsy driving, said Dr. Judith Owens, the policy’s lead author and director of sleep medicine at Children’s National Medical Center in Washington, D.C.

The policy cites studies showing that delaying start times can lead to more nighttime sleep and improve students’ motivation in class and mood. Whether there are broader, long-term benefits requires more research, the policy says.

Many administrators support the idea but haven’t resolved the challenges, said Amundson. She said the pediatricians’ new policy likely will have some influence.

Parents seeking a change “will come now armed with this report,” Amundson said.

Amundson is a former Virginia legislator and teacher who also served on the school board of Virginia’s Fairfax County, near Washington, D.C. Owens, the policy author, has been working with that board on a proposal to delay start times. A vote is due in October and she’s optimistic about its chances.

“ This is a mechanism through which schools can really have a dramatic, positive impact for their students,” Owens said.