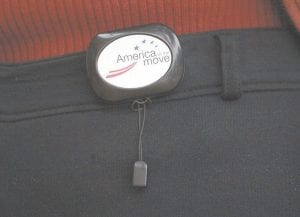 A pedometer, a fitness gadget that costs between $5 and $20, has stood up to multiple research studies, and can help people walk an additional mile each day – but only if they logged their steps. (AP Photo/Mike Groll)

A $20 fitness gadget stood up to multiple research studies, helping people walk an additional mile each day – but only if they logged their steps.

Those who did lowered their blood pressure and lost a few pounds, an analysis found.

Pedometers, also called step counters, clip to a belt or waistband and count the steps the wearer takes during the day. They range in price from $5 to $60, with simple yet reliable models costing around $20.

The analysis found that increasing physical activity depended on setting a goal and keeping a diary of the number of steps walked each day, said coauthor Dr. Dena Bravata of Stanford University. Her report appeared in the November 21 issue of the Journal of the American Medical Association.

“Every night, you write down how many steps you walked that day,” she said. “By flipping back through your diary, you’re able to see patterns: ‘On the two days a week I took the stairs, I increased my steps.”‘

Bravata, a practicing internist, wanted to recommend pedometers to her patients. But she “really wanted to know if these little gizmos that now are increasingly popular worked.”

She and her colleagues analyzed 20 studies from the United States and Canada and half a dozen from Japan, Europe and Australia. The average age of participants was 49, and 85 percent were female because some studies targeted women. The total number of volunteers overall was more than 2,700.

The research showed that pedometer users increased their physical activity by about 27 percent, walking about one mile more a day than they did before they started their step-counting routines. Most of the studies established a baseline by asking these walkers not to change their usual activity while wearing a sealed pedometer, that is, one where they couldn’t see the number of steps, for three to seven days.

On average, the volunteers lost a few pounds. And their blood pressure dropped enough to lower their risk for stroke and heart disease, Bravata said.

Keeping a step diary was key; those who didn’t do that showed no significant increase in walking. Pedometer users who didn’t have a step goal also failed to increase their physical activity.

It’s still unclear whether the effects are long-lasting, she said. The studies followed patients, on average, 18 weeks.

There were lasting effects for Marcy Ross, 54, an encyclopedia editor from Great Barrington, Mass. She has clocked more than 3 million steps since putting on a pedometer 2-1/2 years ago and has lost “five to 10 extra pounds.”

“It’s the best thing I ever did,” Ross said. Recording her steps on the Web site of the non-profit group America on the Move inspires her to walk instead of drive when doing errands and to get up to talk to a co-worker rather than send an e-mail.

Dr. David Bassett Jr. of the University of Tennessee praised the analysis for pulling together what’s known about pedometers and fitness. Bassett has done pedometer research, but was not involved in the new analysis.

“This puts us on firmer ground in saying what we know about the use of pedometers in changing behavior,” Bassett said.

The analysis was supported by a grant from the National Institute on Aging.

America on the Move: http:// americaonthemove.org