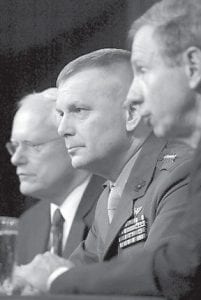 An attempt to blast a crippled U.S. spy satellite out of the sky using a Navy heat-seeking missile – possibly on Wednesday night – would be the first realworld use of this piece of the Pentagon’s missile defense network. But that is not the mission for which it was intended.

The attempted shootdown, already approved by President Bush, is seen by some as blurring the lines between defending against a weapon like a longrange missile and targeting satellites in orbit.

The three-stage Navy missile, designated the SM-3, has chalked up a high rate of success in a series of tests since 2002 – in each case targeting a short- or mediumrange ballistic missile, never a satellite. A hurry-up program to adapt the missile for this anti-satellite mission was completed in a matter of weeks; Navy officials say the changes will be reversed once this satellite is down.

The government issued notices to aviators and mariners to remain clear of a section of the Pacific beginning at 10:30 p.m. EST Wednesday, indicating the first window of opportunity to launch an SM-3 missile from a Navy cruiser, the USS Lake Erie, in an effort to hit the wayward satellite.

Having lost power shortly after it reached orbit in late 2006, the satellite is well below the altitude of a normal satellite. The Pentagon wants to hit it with an SM-3 missile just before it re-enters Earth’s atmosphere, in that way minimizing the amount of debris that would remain in space.

Adding to the difficulty of the mission, the missile will have to do better than just hit the bussized satellite, a Navy official said Tuesday. It needs to strike the relatively small fuel tank aboard the spacecraft in order to accomplish the main goal, which is to eliminate the toxic fuel that could injure or even kill people if it reached Earth. The Navy official described technical aspects of the missile’s capabilities on condition that he not be identified.

Also complicating the effort will be the fact that the satellite has no heat-generating propul- sion system on board. That makes it more difficult for the Navy missile’s heat-seeking system to work, although the official said software changes had been made to compensate for the lack of heat.

The Pentagon press secretary, Geoff Morrell, said Defense Secretary Robert Gates was briefed on the shootdown plan Tuesday by the two officers who will advise him on exactly when to launch the missile – Gen. Kevin Chilton, the head of Strategic Command, and Gen. James Cartwright, the vice chairman of the Joint Chiefs of Staff, who held Chilton’s post until last summer.

“We all have an agreed-upon series of steps that need to be taken for this launch to be given the go-ahead,” Morrell said, adding that no final decision has been made on when to make the attempt.

“The secretary is the one who will decide if and when to pull the trigger,” the spokesman said, adding that Gates was departing Wednesday morning on an around-the-world trip that will include a stop in Honolulu, Halaunched waii, where a military command center will be monitoring the satellite operation.

Known by its military designation US 193, the satellite was in December 2006. It lost power and its central computer failed almost immediately afterward, leaving it uncontrollable. It carried a sophisticated and secret imaging sensor.

Morrell said the cost of adapting the Navy anti-missile system for the shootdown mission was $30 million to $40 million.

China and Russia have expressed concern at the planned shootdown, saying it could harm security in outer space. At the State Department on Tuesday, spokesman Sean McCormack told reporters that the U.S. action is meant to protect people from the hazardous fuel and is not a weapons test.

China was criticized last year when it used a missile to destroy a defunct weather satellite.

The Navy ship-based system, which includes a command-andcontrol and radar system known as Aegis, as well as the SM-3 missiles, is just one segment of a larger, far-flung missile defense system that has been in development by the American military for more than three decades.

Managed by the Pentagon’s Missile Defense Agency, the program includes interceptor missiles sitting in underground silos at Fort Greely, Alaska, and at Vandenberg Air Force Base, Calif., as well as radars around the world that are used to track an enemy missile and help the interceptor hit it.

As currently configured the missile defense system is designed mainly to counter a threat from North Korea. The Bush administration, fearing an emerging missile threat from Iran, is in talks with Poland and the Czech Republic to place interceptor missiles in Poland and a tracking radar in the Czech Republic. Russia has objected strenuously, saying such bases would be a threat to Russia.