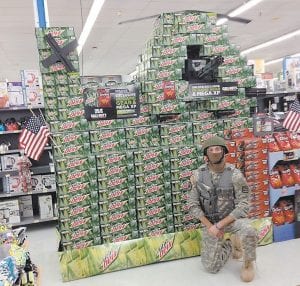 HELICOPTER DISPLAY WINS PRIZE — Austin Mollett, a Pepsi account representative, posed in front of a creative store display that he and Kenneth Ratliff, a Pepsi manager, assembled inside the Whitesburg Walmart in late October.

Two Pepsi employees designed a creative store display to win a $400 video game console for a 10-yearold Premium boy who has leukemia.

Austin Mollett, a Pepsi account representative, asked Kenneth Ratliff, a Pepsi manager, to work with him in a company contest to try to win a Microsoft Xbox One for Brady Morton, a fourth-grade student at West Whitesburg Elementary School who has been receiving chemotherapy treatments for almost three years.

Mollett made a helicopter out of empty Mountain Dew 12-pack boxes. The helicopter, complete with a propeller that turned by a fan motor, was on display at the Whitesburg Walmart the last week of October.

“ I thought we had a good idea,” said Mollett. “It turned out really neat.”

Mollett said that he and Ratliff spent about 10 hours making the helicopter and other pieces and about five hours setting up the display inside Walmart.

The contest was to promote the cross merchandising of Doritos and Mountain Dew Game Fuel in addition to incorporating Call of Duty, a shooter video game.

Mollett and 49 other entrants in Pepsi’s Mid- Atlantic region each won an Xbox One game console and a Call of Duty Advanced Warfare video game. Mollett estimated that about 1,000 entries were submitted throughout the United States.

“Some of the displays were really good,” said Mollett. “One had a tank that looked like it was coming through a wall.”

Mollett said Brady plays video games with friends on Xbox Live and Mollett wanted him to have an upgraded console.

Brady, his siblings, Emma and Dakota, and his parents, Castell and Monica Morton, met Mollett and Ratliff at Whitesburg Walmart Monday morning to receive the Xbox One and video game.

“The kids were ecstatic,” said Mollett. “It was well worth it. To make a family feel a little better this holiday season tickles me to death. I just want to help as many people as I can.”

“Austin and the people at Pepsi are more than generous,” said Castell Morton. “ To think that someone would work as hard as he did to win a contest sponsored by his company and then donate the prize to a child who has seen more than his share of struggles in life is beyond words. I hope that all the people at Pepsi and Walmart that made this happen understand just how grateful we are, especially Brady.”

Brady’s leukemia is in remission and his last chemotherapy treatment at the University of Kentucky pediatric oncology clinic is scheduled for February 2015.