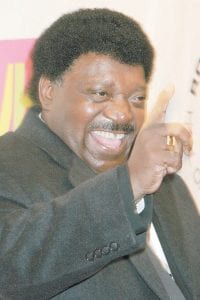 Rock and Roll Hall of Fame member Percy Sledge will perform his soul classic in Whitesburg on July 4 at 8 p.m. at River Park. (AP)

A fireworks display paid for by the Isom Days Committee will begin at dark on July 3 at the Isom Fairgrounds.

The City of Whitesburg’s Independence Day festivities at River Park begin at 1 p.m. on July 4 with inflatables, fire truck rides and a farmer’s market. Everyone is invited to bring a table and sell products at the farmer’s market.

Sledge, a 70-year-old Alabama native, is known best for the soul anthem “When a Man Loves a Woman,” which he wrote in 1966 after his girlfriend left him.

Other hits by Sledge include “Take Time to Know Her,” “Out of Left Field,” “Warm and Tender Love” and “It Tears Me Up.”

Fireworks will begin after his performance.

The City of Fleming-Neon will hold an Independence celebration in downtown Neon beginning at 4 p.m. on July 4 with games for children at the stage area. Aftershock will perform at 7 p.m. A fireworks display will begin at dark.