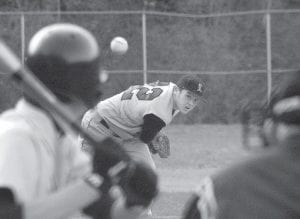 Letcher County Central pitcher Colton Cook looks on as his pitch sailed toward the plate last week as the Cougars took on Johnson Central. The Cougars lost, 16-5. They later beat Magoffin County and Betsy Layne to improve their record to 5-3. (Photo by Chris Anderson)

The Jenkins Cavaliers looked to be no match for an undefeated Perry Central team that had outscored its opponents 56-6 in three games played before Monday.

Perry Central scored in the first inning to take the early onerun lead, but could not muster the offense it used in blowing out its earlier opponents.

The visiting Cavaliers tied the game in the top of the fourth inning when Stephen Stephens scored on Justin Hunsucker’s two-out single to right field. With neither team able to deliver the winning hit, the game went into extra innings.

In the bottom of the eighth, Perry Central loaded the bases with nobody out on a single, a hit by pitch, and a walk.

A masterful effort by Jenkins pitcher Chris Puckett kept the Cavs alive as he struck out the next batter and foiled a squeeze play to get two outs. Puckett then managed to get two strikes on his next hitter, David Napier, but could not get the third before Napier drove a base hit to right field to bring the winning run across the plate for the Commodores. 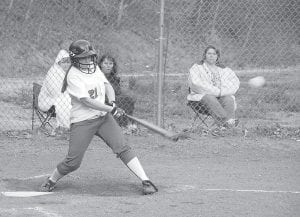 Jenkins Lady Cavs cleanup hitter Hillary Brashear connects with one of her two hits in a fast-pitch softball game against Perry County Central last week. The Lady Cavs are 4-1 on the season after a 12- 5 win over Pike County Central on Tuesday. (Photo by Chris Anderson)

Jenkins second baseman Josh Gross had two hits in the game for the Cavaliers, while teammate Justin Hunsucker had a single which scored Stephen Stephens for the RBI. Jenkins pitcher Chris Puckett was tough on the mound striking out 10 batters over 7-2/3 innings of work.

The Jenkins Lady Cavaliers began their 53rd District Title defense against region foe Perry County Central last week and were slow to get the wheels turning in the right direction.

The Lady Cavs were trailing the Lady Commodores 4-2 in the bottom of the fourth before the offense finally started to come around. The Lady Cavs scored 17 runs over the next three innings, batting around in the seventh, and going on to win in their season opener.

Allie Goff, Emily Walker, Hillary Brashear, Kayla Stambaugh, Tazia Hall, and Sarah Belcher each had one or more singles. Whitney Gibson and Brooke Webb each had a double, and Kayla Stambaugh had a triple. Stambaugh garnered 6 runs batted in and scored twice herself. Each Lady Cavalier that played in the game scored at least one run. Pitcher Rachel Thacker had a good first outing striking out 6 while allowing only 5 hits and one walk.

A late Cumberland lead threatened to spoil the Lady Cavaliers home opener, but a dramatic bottom of the 7th inning would prevent disappointment for Jenkins.

With the Lady Redskins leading 2-1 going into the bottom of the 7th, Jenkins leadoff hitter Allie Goff drew a one out walk and stole two bases to put herself in scoring position. Teammate Rachel Thacker later came to the plate with two outs and Goff on third and smacked a double to left to tie the game. With Jenkins Pitcher Thacker on second, her catcher, Hillary Brashear came to the plate and quickly fell behind in the count with two quick strikes. Brashear did not go down quietly, however, and drove a long double to the outfield fence, bringing in Thacker for the dramatic win.

Allie Goff, Rachel Thacker, Whitney Gibson, and Brooke Webb each had a single, while Thacker and Hillary Brashear had doubles in the game. Sarah Belcher walked and scored, also.

In their only game last week, the Letcher County Lady Cougars routed the Hazard Bulldogs in five innings, 10-0.

This came on the back of freshman pitcher Adiah Cook’s no-hit performance. Cook struck out seven batters and come within one walk of pitching a perfect game.

Tekiah Caudill, Chloe Wynn, Shantayia Kiser, Sierra Kiser, Latisha Potter, and Katie Mynster all had singles in the game, while Potter and Courtney Johnson had doubles. Chloe Wynn had an inside the park homerun and scored three runs.