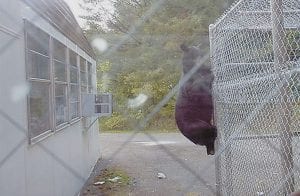 STUDENT BEAR? – William King, custodian at Arlie Boggs Elementary School at Eolia, took this photograph of a bear climbing a fence beside the school on August 24 at 6 p.m. Workers put the fence up around two Dumpsters in hope of keeping the bears away. (Photo by William King)

Move over, Mr. Wildcat, a new animal wants to take over the title as mascot
of Arlie Boggs Elementary School.

A furry creature referred to by one teacher as “Abe the
Bear” in honor of the school’s initials has been seen recently near the school
grounds located at Eolia.

Bonnie King, a cook at ABES, has spotted a bear near the school four times since last spring. King thinks she saw a different bear during each sighting.

“The very first one we saw in April was huge. The one in May was small. The third one we saw had a collar around its neck and tags in its ears. The one we saw (Aug. 23) was probably 300 or 400 pounds,” said King.

King said she has never seen a bear while children were at the school. She said the sightings have always been early in the mornings or late in the evenings. Students at the school have only seen photos of the bears.

“The kids get excited and want to look at the pictures I have taken,” said King. 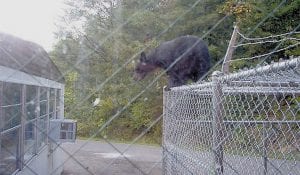 BOXED OUT – A cap placed on top of a fence surrounding two Dumpsters has been keeping bears away from a source of food at the Arlie Boggs school. (Photo by William King)

The bears infatuate King and others.

“I am fascinated with them. I think they are absolutely
beautiful. I just love them,” said King. “A lot of
people like me absolutely love it. Some worry about the kids.”

King said that when she takes photographs of the bears or if the
bears hear noises, they run away.

Jim Slone, director of operations for the Letcher County School
System, said he was told by state wildlife

to try to keep bears away. Still, one bear climbed up
the side of the fence and over the barbed wire, causing

Slone and his crew to think of another way to keep
bears away from the trash.

“We capped the top of it and put fencing over the top of the Dumpsters,” said Slone.

Slone said the Dumpsters are now completely enclosed,
preventing the bears from getting into the garbage. “Obviously the food is the
Even though bears have not harmed anyone at the school, the school district is
taking precautions until the bears are not seen around the school grounds
anymore. issue, but until we get the bear under control, we can’t let the
children play outside,” said Anna Craft, superintendent of the Letcher County
School System.