Pete Townshend, Roger Daltrey still The Who at Super Bowl 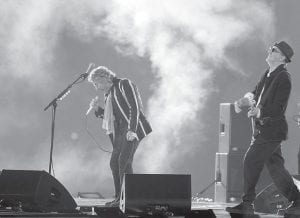 The Who’s Roger Daltrey, left, and Pete Townshend performed during halftime of the NFL Super Bowl XLIV football game between the Indianapolis Colts and New Orleans Saints in Miami on Sunday. (AP Photo)

Maybe 30 years ago, The Who would have been an explosive act for a Super Bowl halftime show. Or anywhere else.

At Sunday’s Super Bowl, The Who — led by what’s left of them from the original groundbreaking foursome a generation ago — did all that was expected under these circumstances. Filling the dozen minutes allotted them between two halves of football pageantry, the group pounded out nostalgia and spectacle — and five classic songs.

They’re not ready for Branson, Mo.

The set began with “Pinball Wizard,” which quickly led into a generous rendition of “Baba O’Riley.” After “Who Are You,” there was a brief musical nod to “See Me, Feel Me,” then a big finish with “Won’t Get Fooled Again” — all songs released between 1969 and 1971, except for the last, in 1978.

Original drummer Keith Moon died in 1978 and bassist John Entwistle died in 2002, but The Who lives in the spirit of its two intrepid front men: guitarist-composer Pete Townshend and vocalist Roger Daltrey.

The original Who were British lads who early on forged a timeless up-yours message to their seniors with the mantra “Hope I die before I get old.” But that lyric wasn’t heard Sunday night, nor was their landmark song “My Generation.” After all, Townshend and Daltrey are well into their 60s.

Their voices aren’t what they were, and it’s been a long time since the once-hyperkinetic axman Townshend did his balletic leaping and springing. During Sunday’s show he off ered only a few trademark windmill guitar licks.

This is not to say these musicians, even in their advancing age, didn’t make a powerful impression. And, of course, the staging helped, with plenty of pyrotechnics, laser pinstripes slicing the Sun Life Stadium, and illuminated eruptions dousing the arena.

Despite its brevity, it was a big, warm, enjoyable show, and The Who looked right at home.

Maybe they should, since their Super Bowl miniconcert was being aired on CBS. Three of the five songs they played are heard every week as the themes for CBS’ trio of hit “CSI” crime dramas.

Hmm, was all this just an elaborate “CSI” plug?