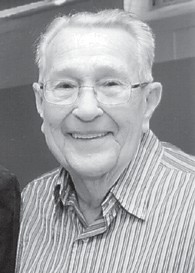 Mr. Adams was born December 3, 1933 in Letcher County and was a U.S. Navy veteran. He was a member of the Crescent Hill Masonic Lodge #456, Antioch Church and the local UFCW #227. He was an avid University of Louisville Cardinals fan.

Preceding him in death were his parents, David and Tina Adams, and sisters, Cindy Adams, June Whitaker and Carolyn “Dot” Gilley.

He leaves to cherish his memory his wife of 59 years, Jeanie Adams; children, Christy Jackie and husband John and Calvin Adams and wife Mary; grandsons, Carson and Cameron Adams; his twin brother, Hal Adams and wife Claudetta; and his sister, Emma Amburgey, and brother, Mert Adams and wife Retta. Special thanks to his caregiver, Kelly Geddes.

Funeral services were held December 18 in the chapel of Schoppenhorst Underwood and Brooks Funeral Home with burial in Brookland Cemetery.

Expressions of sympathy made be made to the Alzheimer’s Association.