Where’s the darkest corner in college football this side of Unhappy Valley, Pennsylvania this week? Lexington, Kentucky.

Much as Rich Brooks was a target for critics near the end of his second season at Kentucky in 2004, Joker Phillips is hearing the mean howls from that constituency in Big Blue Nation that former coach Bill Curry called “fellowship of the miserable.” This week, the cacophony is louder, longer and makes Phillips’s job pushing the boulder up the hill even harder.

Being reasonable and having patience are qualities fans assign to sissies in football’s smash mouth South. The bar set thusly, and considering a 38-8 thumping administered by Vanderbilt last week, Joker Phillips and his coaches deserve the howl and hiss given the Wildcats showed up in Nashville on time, but left their hearts back in Lexington.

Uninspired, unenthusiastic Kentucky was stuffed by halftime (24-0) by a football program apparently in beautiful-to-watch black and gold renaissance. Vanderbilt. Wildcat fans witnessed in Vanderbilt what they long to see at Commonwealth – a born-again team that has undergone an attitude transplant. 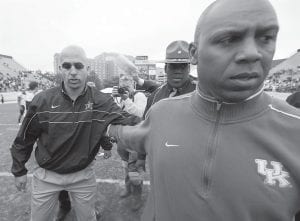 First year coach James Franklin, who will face his own angry Fellowship of the Miserable sooner or later, has willed his players to believe they can compete in Smash Mouth Land. The ’Dores play at the edges of legal violence risking yellow flags for personal foul, holding, and false starts, but they score points in the heads of opponents. Kentucky was easy prey. The Wildcats showed up ill-prepared and ripe for personal fouls, false starts, awful execution, an ugly score. Surrender.

What next for UK football? These ideas …

• Players. A collective soul search; a lobotomy-level attitude adjustment, and never mind Calipari’s team! And never ever whine about fan support. Finally, with knucklehead penalties in mind, as Sheriff Andy Taylor told his kid once, “act like somebody.”

Coaches? A collective soul search. While Franklin at Vandy, Charlie Strong at Louisville and Willie Taggart at Western have advanced their programs, UK coaches have not. They’ve done poorly fielding a product not worth $48 a pop and $10 parking.

For well-paid Joker and his X and O pals, no whine, no excuses. With Texas A&M and Missouri joining Smash Mouth South, go recruit large, ornery young men with big motors a (coachable) mean streak and pride. And, find a tailback or two bigger than 5-feet-8, 175-pounds. This is the SEC, for heaven’s sake.