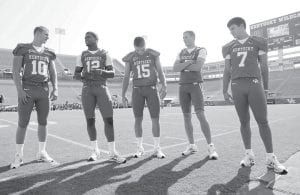 Five hours a night and he’s good. Six and the Kentucky coach finds he can barely hold his head up in the afternoon.

Considering the challenge Phillips faces in his first year on the job, getting too much sleep won’t be a problem.

A jumbled quarterback situation. A rebuilt off ensive line. A defense that will be patchwork in places. An insomnia-inducing schedule. Oh, and expectations, a notion historically reserved for the school’s basketball team.

Phillips is fine with that. More than fine, actually. The former player and longtime assistant who took over when Rich Brooks retired in January knows there are worse problems to have than trying to get the Wildcats to a bowl game for a fifth straight season.

The 47-year-old native of tiny Franklin, Ky., has been around the program for most of the last 30 years. He’s familiar with the pattern: Short bursts of success followed by long stretches of mediocrity or worse. It’s time for a change.

“This year is critical,” he said. “For us, if we can get to a bowl game and build on this thing this year, I think we’ll be really good for a long time.”

To do it the Wildcats will have to continue to build on a theme popularized by Brooks, who brought the program back from the dead. To change people’s minds about Kentucky, he said, the Wildcats would have to start beating some teams it hasn’t beaten in a long time.

“It used to be some of the teams thought you can count that (Kentucky) as a ‘W’ right off the bat,” he said. “People expect us to win a lot of those games now.

To do it the Wildcats will have to find some consistency at quarterback. Senior Mike Hartline starts training camp as the de facto starter mostly by default. He has the most experience, but Phillips has left little doubt it’s a three-way race between Hartline, sophomore Morgan Newton and redshirt freshman Ryan Mossakowski.

Newton’s mobility could give him an edge, particularly while playing behind a retooled offensive line that will feature four new starters. Yet Phillips has stressed the need for the Wildcats to be more dynamic in the passing game.

Big plays through the air were difficult to come by, forcing Phillips to use talented wide receiver Randall Cobb in the Wildcat formation where he would try to make plays with his legs.

Phillips would prefer to let Cobb loose in opposing secondaries than have him line up in the shotgun. Cobb isn’t complaining about the arrangement. If one of the quarterbacks finds a way to get a firm grasp of the position and get the ball downfield, Kentucky suddenly becomes a lot more explosive.

Count Newton among those hoping the quarterback carousel that’s been in place the last three years finally stops.

“I just think it makes sense to have one person play,” Newton said. “It just makes it easier on everybody else to get in a rhythm. I think our schedule sets up to make a good run this year. Consistency would be nice for a change.”

Two years ago, Hartline and Cobb ended up splitting time at quarterback. Last year, Hartline, Cobb and Will Fidler combined for just 140 yards passing a game, worst in the SEC.

Still, the Wildcats were solid enough in the running game to squeeze out a 7-6 record and make it to a bowl game for the fourth straight year for the first time in school history.

Speedy but often-injured Derrick Locke returns hoping to find a way to stay healthy. He ran for 907 yards and six touchdowns a year ago, but struggled to stay healthy. Keeping out of the trainer’s room will be a major accomplishment, and he’s relying on the line to help him produce.

“I’m not Superman,” Locke said. “I can’t do it by myself. They understand that I need them just as much as they need me.”

It’s a refrain echoed on the defense, which will have to find a way to replace departed stars Corey Peters, Micah Johnson and Trevard Lindley.

Phillips has raved about defensive end DeQuin Evans. The sometimes scattered senior spent most of last year relying mostly on instincts after transferring in from Los Angeles Harbor College. Not anymore.

“The thing now is for him to know why he’s doing his assignment, to know where everybody else is fitting in and make sure he’s still playing with a motor,” Phillips said.

If Evans needs a reminder, he need only look at his coach. Though his new job means new responsibilities — particularly in dealing with the media and making appearances throughout the state to promote the program — Phillips has been inside the team’s training complex as much as ever.

He eats with his players whenever possible and bounds around the practice field with the same energy that made him a three-year letterman at wide receiver nearly 30 years ago.

Phillips admits the key to his philosophy is telling his players they’re better than they actually are believing confidence will breed more confidence.

It already appears to be working.