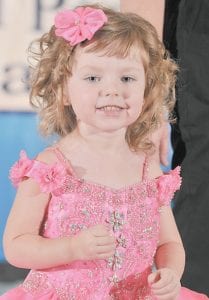 Chloe Rose Wright was crowned Princess and Most Photogenic at the Kentucky Festival State Finals in Lexington on Nov. 16. Contestants in the competition had placed queen, princess of duchess in local festival pageants. Chloe competed in the two-year-old division of 14 contestants. She is the daughter of Mark and Ellena Wright of Kona, and granddaughter of Robert and Rose Adams of Haymond, and Jesse and Esther Wright of Jenkins. She is the greatgranddaughter of Jewel King of Cromona.