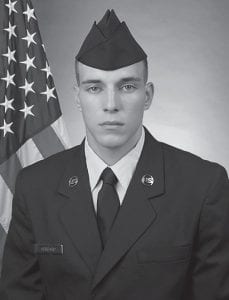 Air Force Airman Austin K. Hubbard was graduated from basic military training at Joint Base San Antonio- Lackland, San Antonio, Tex. He completed an eight-week program including training in military discipline and studies, Air Force core values, physical fitness and basic warfare principles and skills. Hubbard earned four credits toward an associate in applied science degree through the Community College of the Air Force. He is the son of Sheila Hubbard of Sassafras, and is a 2013 graduate of Perry County Central High School.