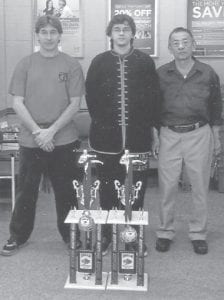 Frank Sexton, chief instructor at John Ng’s Four Seasons Martial Arts School of Whitesburg, and student Jacob Creech competed in the 15th annual Somerslam Open Martial Arts Tournament March 22 in Somerset and won top awards in their divisions. The school will compete in several tournaments in upcoming months in Kentucky and Tennessee. Creech, 15, has been studying martial arts for two months. He is the son of Rebecca and Frank Sexton of Burdine. Pictured are (left to right) Sexton, John Ng, and Creech.