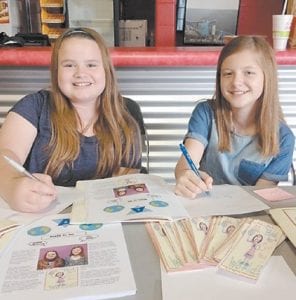 Shyann Holbrook (left) and Alex Kincer, sixth-graders at Fleming-Neon Middle School, took part in the second annual Action Research Summit in Pikeville recently as they promoted their book, Al Had to Save the World. The girls co-wrote and illustrated the book last year while they were in Amber Stewart’s fifth-grade language arts class at Martha Jane Potter Elementary School. Alex, daughter of Keith and Georgie Kincer, and Shyann, daughter of Marie and Ricky Holbrook, were joined by their parents and other family members as they enjoyed a day of selling and signing their book alongside several other student authors from around the region.