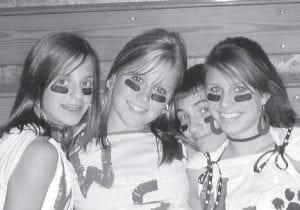 MR. BULLDOG – Tanner Walters was presented the annual Mr. Bulldog Award at the recent Cowan Elementary School girls’ basketball game against Beckham Bates Elementary School. He is an eighthgrade student at Cowan and is a member of the varsity academic team and basketball and football teams. He is the son of Paulla and Eddie Adams of Ermine, and Mark Walters of Garrett. His grandparents are Sheila and Frog Walters of Blackey. He has a younger brother, McQuade, 11, and a younger sister, Maysa, 18 months. He is pictured with three friends, Jessica Craft, Briana Dotson, and Morgan Wilson, who are also eighth-grade students at Cowan.