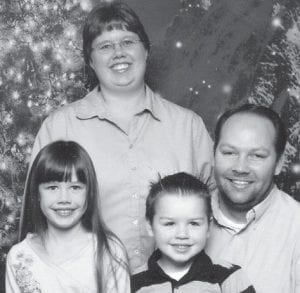 PROMOTED – Letcher County native Chris Kincer was promoted recently to production manager of the Optical Lab for Wal-Mart in Crawfordsville, Ind. He began his career at Wal-Mart in 1992 in Whitesburg. He left Wal-Mart to serve in the military and then returned in 1999 as an assistant manager in training. He has served as assistant manager and co-manager for various Wal-Mart stores and most recently has been a co-manager in Crawfordsville. Pictured are Kincer and his wife, Kebra, with their children, Miranda, 6, and Christian, 4. His parents are Clay and Iona Noble of Premium, and Ben and Cynthia Kincer of Dayton, Ohio.