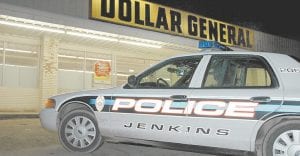 BURGLARY AT MAYKING – A Jenkins City Police cruiser sat in front of the Dollar General Store at Mayking early Tuesday morning after a break-in was reported. Jenkins officer Anthony Maggard stood guard at the store through the early morning hours after the front door was damaged and could not be locked. See story on Page 11. (Photo by Chris Anderson)