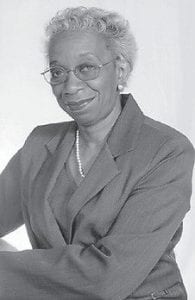 ANNIVERSARY – Willie Holland of Jenkins, celebrated her 20th year of working at Hardees of Jenkins on January 4. She has worked at Hardees since the restaurant opened in 1988, and is the only original employee still working. She is the daughter of the late James and Corrine Thompson of Jenkins, and has two children, Vickie Lasley and husband David of Louisville, and Navel Intelligence Officer Jeff Holland and wife Christy of Japan. She also has three grandchildren, Emily Corrine, Nicholas, and Jeff Jr.